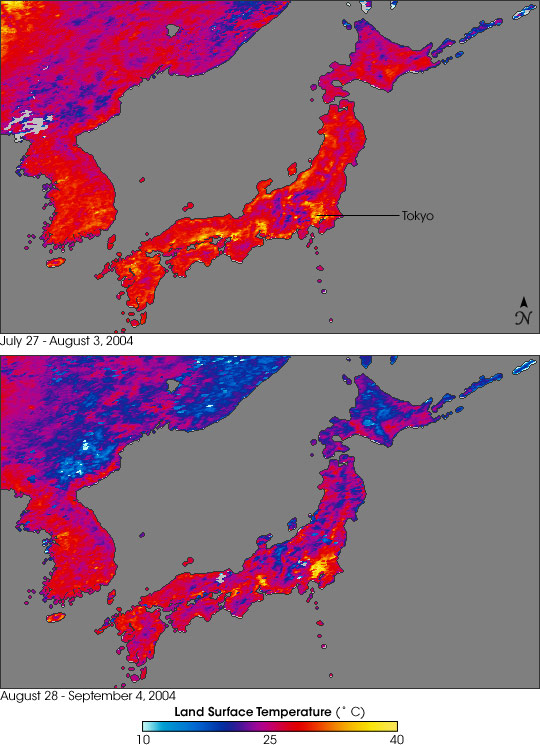 In the Japanese capital, Tokyo, the summer has been sweltering in 2004. Meteorologists there benchmark the summertime temperatures against a reference they call a “midsummer day,” which is a day where the temperature reaches or exceeds 30 degrees Celsius. According to news reports, Tokyo set two records this summer: the first for the total number of “midsummer days” in a season (68), and the second for the most consecutive “midsummer days” (38).

The elevated temperatures in cities that scientists have come to recognize as part of the urban heat island effect are especially obvious in the more recent image (bottom). Although temperatures have dropped considerably in many parts of the island of Honshu (main island of Japan), yellow patches along the numerous inlets on the southern coastline mark the location of (right to left) Tokyo, Nagoya, and Osaka and Kyoto,  stands out in bright yellow throughout much of the time period.

The urban heat island is caused by a variety of factors including absorption and re-radiation of solar energy by dark surfaces like asphalt, by heat given off from building and vehicle air conditioners, and by loss of natural vegetation, which cools the air by drawing moisture up through its roots and evaporating it from its leaves, a process called evapotranspiration.