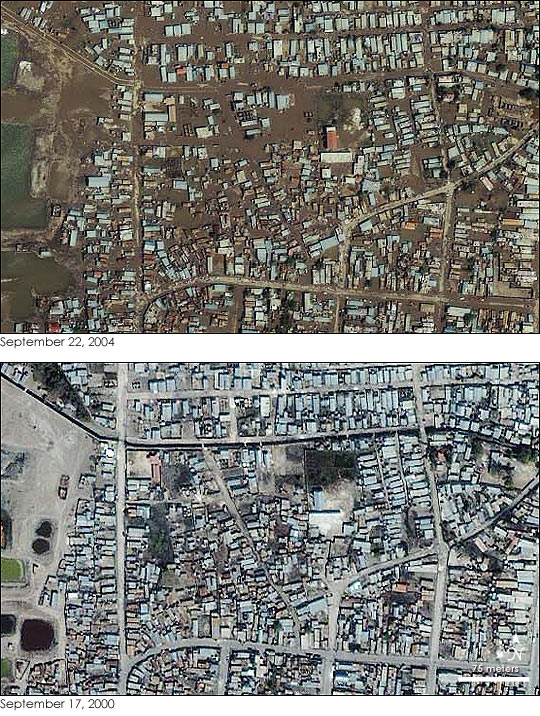 A wall of water and mud buried much of Gonaives, Haiti, in the wake of Tropical Storm Jeanne, which struck the island of Hispaniola on September 18, 2004. The storm hovered over the island for as much as 30 hours, pounding the region with heavy rain. Four days later, on September 22, the Ikonos satellite captured this high-resolution view of the water-logged city. Brown mud or water still covers a large part of the city. Roads that were visible on September 17 have disappeared, as have a number of buildings. The densely populated city of about 200,000 was the most severely impacted region of Haiti. As of September 24, the death toll stood at 1,260, with at least a thousand more still missing, according to news reports. The large images provided above reveal how much of the city was affected by the floods. They show a wider view of the city at 1 meter per pixel. Brown flood water covers nearly the entire scene.

The floods in northeastern Haiti could be doubly devastating because they may have destroyed much of the country’s agriculture. Gonaives and the surrounding land, the Artibonite region, is the country’s breadbasket. Initial media reports say that Jeanne wiped out fields and gardens around Gonaives, and if the damage is more widespread, Haiti may be facing a food crisis. The Food and Agricultural Organization of the United Nations is just beginning their assessment to determine the exact extent of the damage.

Ironically, agriculture may be partly to blame for the severity of the floods. Haiti is particularly susceptible to flooding because of large-scale deforestation on the Haitian part of the island where most trees have been cut down to make charcoal for cooking or to clear land for agriculture. Without trees to slow or stop rainfall, the water rushes over the sun-baked ground, filling low spots. In late May, thousands died after heavy rainfall triggered widespread floods in southern Haiti. Located on the northeast coast of Haiti, Gonaives was not affected by the earlier floods.