floods and mudslides in Gonaïves. The disaster was repeated in September 2008, when a string of storms—Gustav, Hanna, and Ike—drenched Haiti."> 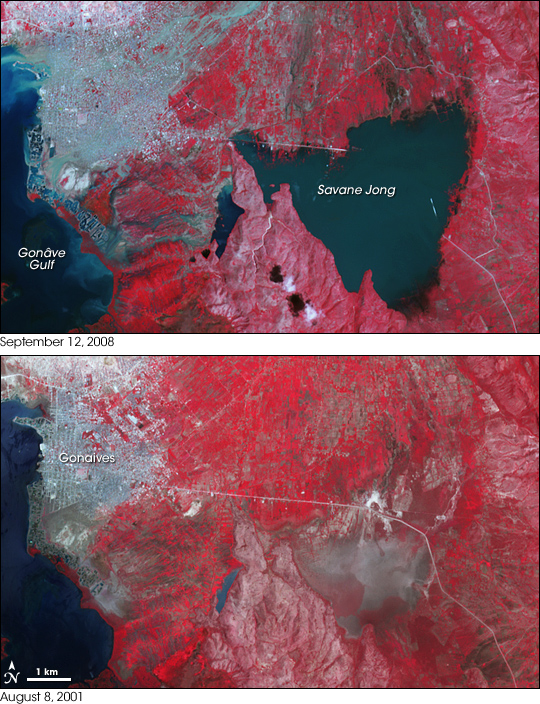 The flood-prone city of Gonaïves, Haiti, is a victim of topography. Situated in a valley, Gonaïves is surrounded on three sides by hills and mountains. On the fourth side, the city abuts the Caribbean Sea. As these images show, water running out of the mountains is channeled two places: into the city and into the neighboring Savane Jung, a low-lying area east of the city. This topography caused deadly flooding in both 2004 and 2008, when tropical storms inundated the northeastern corner of Haiti.

In September 2004, more than 2,500 people died when Tropical Storm Jeanne unleashed torrential rain on northeastern Haiti, triggering devastating floods and mudslides in Gonaïves. The disaster was repeated in September 2008, when a string of storms—Gustav, Hanna, and Ike—drenched Haiti. Though the resulting floods were as extensive as in 2004, the death toll was not as great. As of September 15, 423 people had been reported dead, 50 were missing, and more than 100,000 were in shelters, said the United States Agency for International Development (USAID).

These images, captured by the Advanced Spaceborne Thermal Emission and Relfection Radiometer ASTER on NASA’s Terra satellite, show the region around Gonaïves on September 12, 2008, after the flood-inducing storms of 2008 (top), and on August 8, 2001, when the area was dry. In these false-color (infrared-enhanced) images, plant-covered land is red, and water is blue. The reflective surfaces of the city are bright white and cement gray, arrayed in a regular grid that runs from the mountains to the waterfront. In the mountains, exposed earth is also gray and tan.

Much changed in the seven years that elapsed between the two images. Gonaïves grew. The gray web of roads and buildings extended out on every side. But there are also signs of disaster. Long streaks of gray paint the mountains where mud and water poured down, ripping out or burying plants on the mountains. Some of these scars may be old. They were present in September 2004 in the wake of disastrous floods brought on by Tropical Storm Jeanne. Some of the scars are likely still fresh: the floods triggered by Gustav, Hanna, and Ike were only just beginning to recede when ASTER captured this image. Evidence of fresh flooding can be seen in the northern edge of the city, where tan mud blurs the grid formed by streets and blocks of buildings. The mud flows into the Gonâve Gulf, creating a tan plume in the dark blue water.

The other evidence of flooding is the water-filled Savane Jong. The low-lying savanna occasionally fills with water during the rainy season. In both 2004 and 2008, the seasonal lake expanded north to cover the main road connecting Gonaïves with Haiti’s capital, Port-au-Prince, making it difficult to ship emergency supplies to the flooded city. ASTER and Landsat 7 imagery (including the scenes shown here) reveal that the surface area of the water-filled savanna grew 300 percent after Tropical Storms/Hurricanes Gustav, Hanna, and Ike passed over the island, said Emil Cherrington, a scientist at CATHALAC who works on SERVIR, a NASA and USAID-supported project that provides satellite data and analysis, models, and decision support products to Central America and the Caribbean. Though the Savane Jong also filled in 2004 (see Floods in Gonaïves, Haiti on the Earth Observatory), the savanna-lake covered a much larger region in 2008. The Savane Jong is near the outlet for the Bassin de la Quinte watershed, which may also contribute to the water accumulating in the grassland, said Cherrington.