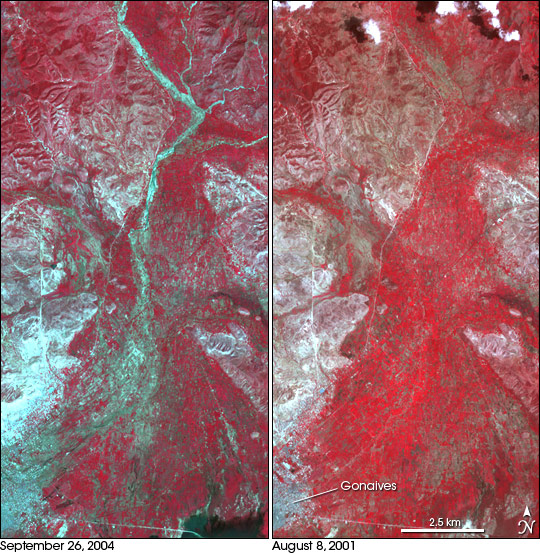 The wall of water that descended on Gonaives, Haiti, following Tropical Storm Jeanne on September 18, 2004, also scoured out a broad channel in the landscape. The violence of the floods is apparent in the above false-color images, acquired by the Advanced Spaceborne Thermal Emission and Reflection Radiometer (ASTER) before and after the floods. The rush of water has left a silvery path of gravel and mud that is as much as 500 meters wide starting about 15 kilometers upstream of the city. As the water approached the less mountainous coast where Gonaives is located, it fanned out over the plain. The primary path of the flood seems to take the water into Gonaives and the land to its immediate north. In the pre-flood image, acquired on August 8, 2001, the city is the gray region in the lower left corner. In the image acquired on September 26, 2004, the city is obscured by the blue-green sediment left by the flood water.

To the east of Gonaives, some of the flood water has filled a lake basin, the top of which is visible in the lower right corner of the image. The thin white line across the bottom of the image is a road leading to Gonaives. The road has been submerged in the lake basin, though is still visible beneath the dark blue water.

In these false-color images, vegetation is bright red and water is black. Bare land is white and light blue. Clearly the hills around the city are bare, one of the primary reasons for the floods. Without trees to slow and absorb rainfall, the water rushed into depressions in the land and poured to the ocean beyond Gonaives.