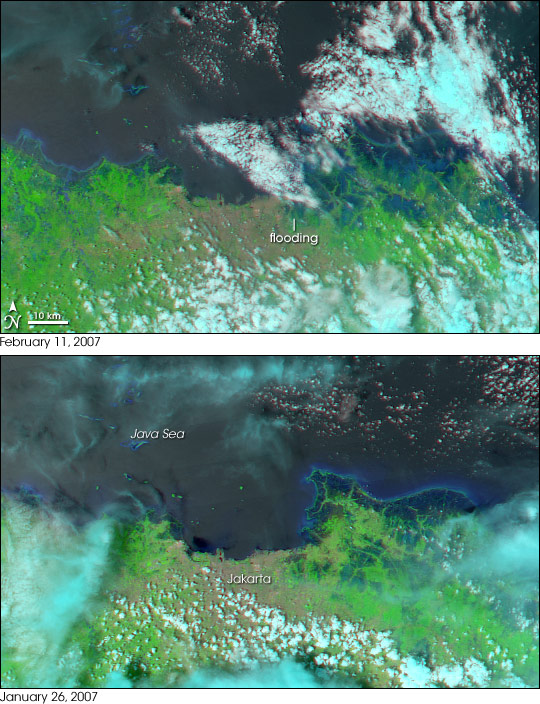 Torrential rains pounded Jakarta, Indonesia’s capital, starting in late January 2007, causing floods that buried parts of the city under as much as five meters (16 feet) of water, said the World Health Organization (WHO). When the clouds finally cleared enough for the Moderate Resolution Imaging Spectroradiometer (MODIS) on NASA’s Aqua satellite to capture the top image on February 11, most of the water had receded, but East Jakarta was still flooded. The city of Jakarta is tan compared to the bright green of the surrounding plant-covered land in these images, made from both visible and infrared light. In this type of image, water is black, or dark blue when tinged with sediment, which makes it stand out from other features in the image. Clouds, which are light blue and white, obscure some of the flood region.

The city of Jakarta was built on a marsh, much of which is below sea level. The web of blue and green around the city in the lower image, taken on January 26, reveals that some of the marshland may still exist, though some of the water may be early floods, since the rains started a few days before the image was taken. By February 11, the extent of land covered in water had expanded to include sections of East Jakarta.

As of February 15, the United Nations Office for the Coordination of Humanitarian Affairs (OCHA) reported that 80 people had died in the floods, and 16,030 remained displaced. Though water levels were receding [except in East Jakarta where as much as 100 centimeters (3 feet) of water remained], the effects of the floods were still being felt, said OCHA. Water-related diseases such as diarrhea, dengue fever, and leptospirosis had been reported in hospitals throughout Jakarta.