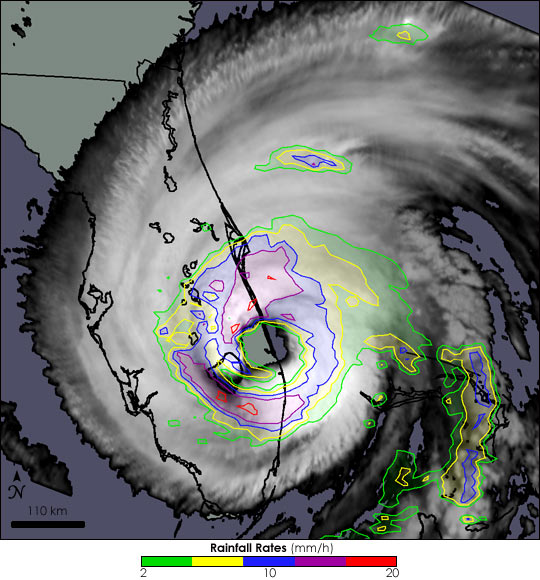 After an eventful voyage through the Atlantic, Hurricane Jeanne struck the east coast of Florida on Sunday, September 26, 2004, as shown in the image above. The data in this image was collected by the Tropical Rainfall Measuring Mission (TRMM) satellite at 09:47 UTC (4:47 AM EDT), when the storm was at Category 3 on the Saffir/Simpson scale, with sustained surface winds of 110 mph. In the image above, the black bar in the lower left corner is 70 miles long, north is up, and the shades of gray indicate the cloud height with white indicating the highest clouds. Color contours indicate the surface rainfall rate. The cloud height information comes from the satellite’s infrared instrument and the rain estimates from the satellite's passive microwave instrument. By combining the information from both instruments, we can see that, at the time of the satellite overflight, most of Florida was under dense overcast skies but heavy rain was falling only over one portion of Florida's east coast. Scientists are trying to improve their understanding of the complex relationship between clouds and rain.

To have a better perspective on the structure of Hurricane Jeanne at landfall, it helps to consider the storm’s evolution over the past ten days. A composite image shows data from five of the TRMM satellite’s overflights of Hurricane Jeanne between September 17 and 26, 2004. The track of the storm is shown in red, based on data from NOAA’s National Hurricane Center. The tracks of the other three hurricanes that have struck Florida during the past two months (Hurricanes Charley, Frances, and Ivan) are shown in gray. Between September 17 and 18, Jeanne became disorganized due to its collision with the Dominican Republic and Haiti, where it left over 1000 people dead. On September 20, Jeanne reformed a tight eye, and by September 23, there was a symmetric ring of rain surrounding the eye, which suggests a well organized storm.

Each of the five overflights mentioned above are shown in greater detail in this image sequence. On September 17, Jeanne was merely a tropical storm after having weakened as it pasted over Puerto Rico. Nonetheless, Jeanne remained fairly well organized with heavy rain to the north and east of the low pressure center. The low pressure center had just made landfall over the Dominican Republic and was approaching Haiti. On September 18, Jeanne was so poorly organized that it is difficult to determine the center of the storm by looking at the cloud cover. Several days of favorable conditions in the Atlantic gave Jeanne a chance to regain hurricane strength winds. By September 26, when Jeanne struck central Florida, not only had its winds accelerated to 110 mph, but the area covered by clouds and heavy rain had increased.

TRMM is a joint mission between NASA and the Japanese Aerospace Exploration Agency (JAXA).