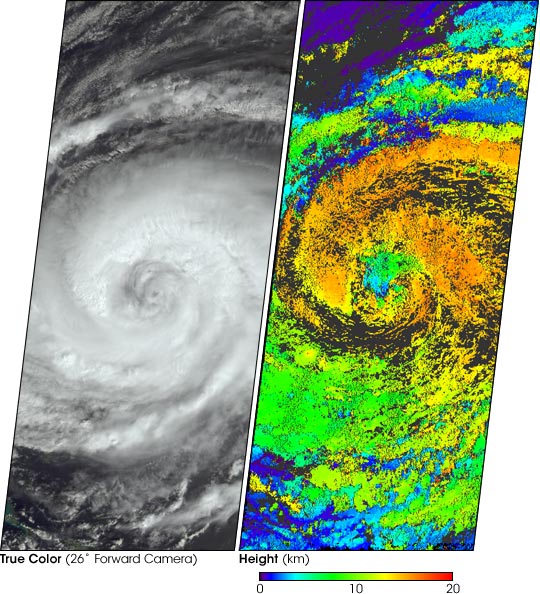 After causing widespread destruction on Puerto Rico, Haiti, and the Dominican Republic, Hurricane Jeanne was weakened to Tropical Storm status for several days before it regained strength over the Bahamas as a Category 2 hurricane. When Jeanne made landfall in U.S. territory on September 26, it was the fourth major hurricane of the 2004 Atlantic hurricane season to strike Florida. These visualizations of Hurricane Jeanne on September 24 were captured by NASA’s Multi-angle Imaging SpectroRadiometer (MISR). The still panels include a natural-color view from MISR’s 26° forward-viewing camera (left) and a two-dimensional map of cloud-top heights (right). In addition, a #8220;multi-angle fly-over” is provided as an animation using views from all nine MISR cameras.

The nine camera views which make up the animation were acquired over an interval of about 7 minutes, and have been processed to give an approximate perspective view. The cloud height map was produced by automated computer recognition of the distinctive spatial features among images acquired at different view angles. Two-dimensional maps of cloud height such as these offer an opportunity to compare simulated cloud fields against actual hurricane observations. Results indicate that clouds within Jeanne had attained altitudes of more than 16 kilometers above sea level. The height field pictured here is uncorrected for the effects of cloud motion. Wind-corrected heights have higher accuracy but sparser spatial coverage.

The Multi-angle Imaging SpectroRadiometer observes the daylit Earth continuously and every 9 days views the entire globe between 82 degrees north and 82degrees south latitude. The MISR Browse Image Viewer provides access to low-resolution true-color versions of these images. These data products were generated from a portion of the imagery acquired during Terra orbit 25372. The still image panels cover an area of about 400 kilometers by 884 kilometers, and utilize data from within blocks 68 to 71 and within World Reference System-2 path 10.