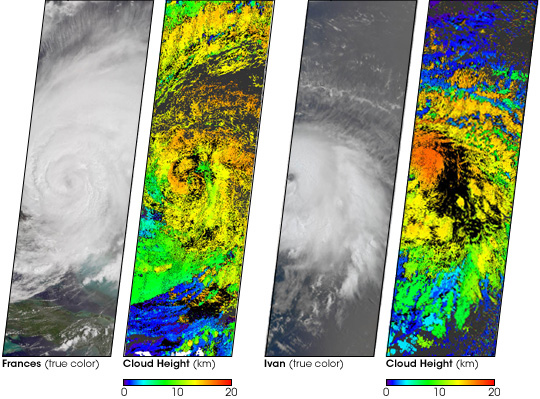 NASA’s Multi-angle Imaging SpectroRadiometer (MISR) captured these images and cloud-top height retrievals of Hurricane Frances on September 4, 2004, when the eye sat just off the coast of eastern Florida, and Hurricane Ivan on September 5, after the storm had devastated Grenada and was heading toward the central and western Caribbean. Hurricane Frances made landfall in the early hours of September 5, and was downgraded to Tropical Storm status as it swept inland through the Florida panhandle and continued northward. Following on the heels of Frances is Hurricane Ivan, which is on record as the strongest tropical hurricane to form at such a low latitude in the Atlantic, and was the most powerful storm to have hit the Caribbean in nearly a decade.

The ability of forecasters to predict the intensity and amount of rainfall associated with hurricanes still requires improvement, especially on the 24- to 48-hour timescale vital for disaster planning. To improve the operational models used to make hurricane forecasts, scientists need to better understand the multi-scale interactions at the cloud, mesoscale and synoptic scales that lead to hurricane intensification and dissipation, as well as the various physical processes that determine hurricane intensity and rainfall distributions. Because these uncertainties with regard to how to represent cloud processes still exist, it is vital that the model findings be evaluated against hurricane observations whenever possible. Two-dimensional maps of cloud height such as those shown here offer an unprecedented opportunity for comparing simulated cloud fields against actual hurricane observations.

The lefthand panel in each image pair is a natural-color view from MISR’s nadir camera. The righthand panels are cloud-top height retrievals produced by automated computer recognition of the distinctive spatial features between images acquired at different view angles. These results indicate that at the time that these images were acquired, clouds within Frances and Ivan had attained altitudes of 15-16 kilometers (9-10 miles) above sea level, respectively. The height fields pictured here are uncorrected for the effects of cloud motion. Wind-corrected heights (which have higher accuracy but coarser spatial coverage) are within about 1 kilometer of the heights shown here.

The MISR observes the daylit Earth continuously and every 9 days views the entire globe between 82° north and 82° south latitude. These data products were generated from a portion of the imagery acquired during Terra orbits 25081 and 25094. The panels cover an area of 380 kilometers x 924 kilometers, and utilize data from within blocks 65 to 87 within World Reference System-2 paths 14 and 222, respectively.