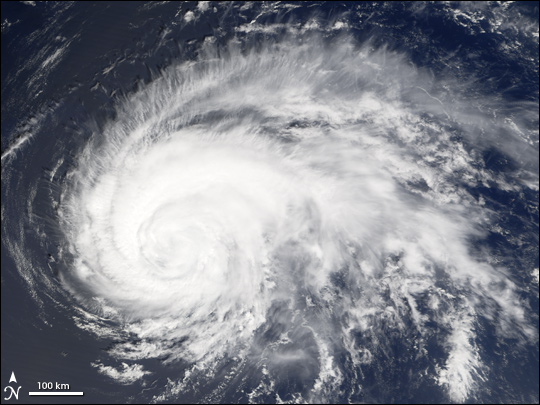 Hurricane Gordon was the seventh named storm of the 2006 Atlantic hurricane season. Gordon started as a tropical depression (area of low air pressure) off the Leeward Islands in the Caribbean on September 10. On September 13, 2006, it became a Category 1 hurricane. Gordon intensified in the next day, reaching Category 3 status in 24 hours, according to the National Hurricane Center. Gordon was the first major hurricane in the 2006 season. The previous two hurricanes in 2006, Ernesto and Florence, never intensified beyond Category 1 strength.

This photo-like image was acquired by the Moderate Resolution Imaging Spectroradiometer (MODIS) on NASA’s Terra satellite on September 15, 2006, at 10:35 a.m. local time (14:35 UTC). Gordon is a very large and well-defined hurricane in this image, possessing a distinct and tightly wound central portion, a clear and well-defined eyewall structure around the eye of the storm, and an eye with only a little cloud cover (sometimes called an “open,” or partially open, eye). These characteristics are all hallmarks of powerful hurricanes. To the north and east of the storm, a large band of more diffuse cloud is pocked with darker spots where powerful thunderstorms are forcing up tall cloud towers that cast shadows onto the cloud deck below. Hurricane Gordon had sustained winds of around 180 kilometers per hour (110 miles per hour) at the time this satellite image was acquired, according to the University of Hawaii’s Tropical Storm Information Center.

Gordon, however, was nowhere near land and as of September 15, it was projected to weaken over cooler waters as it veered northeast in the general direction of the Azores Islands. In the hours immediately after this MODIS image was obtained, the storm began to decline in power, though it remained quite strong and large.