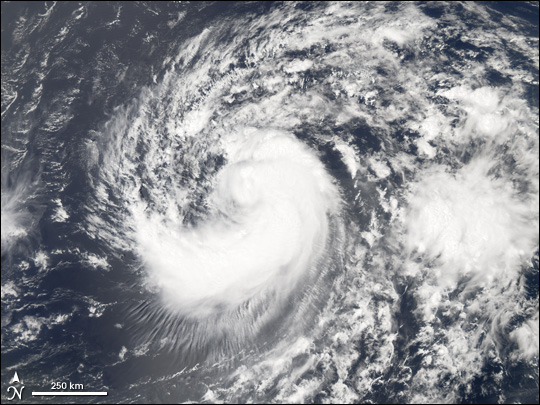 Hurricane Helene was the eighth named storm of the 2006 Atlantic hurricane season. The tropical depression (area of low air pressure) from which it formed began intensifying and forming a tropical storm system south of the Cape Verde Islands on September 12. The system crossed the Atlantic Ocean over the course of several days, gathering power as it went. By the morning of September 17, it was a powerful Category 3 hurricane.

This photo-like image was acquired by the Moderate Resolution Imaging Spectroradiometer (MODIS) on NASA’s Aqua satellite on September 15, 2006, at 12:10 p.m. local time (16:10 UTC). Helene was still a tropical storm at this point in time, but hours from reaching Category 1 hurricane status. This MODIS image of Helene shows the hallmarks of a storm system in the act of intensifying, with a tightly wound core around hints of a forming eye, some developing spiral-arm structure, and to the south and west of the storm, a radial cloud pattern seen in many hurricanes. The spiral structure is incomplete and highly asymmetric, more typical of a tropical storm than a hurricane. Tropical Storm Helene had sustained winds of around 110 kilometers per hour (70 miles per hour) at the time this satellite image was acquired, according to the University of Hawaii’s Tropical Storm Information Center. These speeds placed the storm just below the threshold of hurricane status.

While only the second major (Category 3 or higher) hurricane of the season, Helene comes immediately on the heels of the first, Hurricane Gordon. As of September 17, storm track projections showed a reasonable probability of Helene passing near Bermuda. The island was still recovering from an indirect hit from Hurricane Florence just two weeks earlier and from storm surge and strong surf from a more distant Hurricane Gordon.