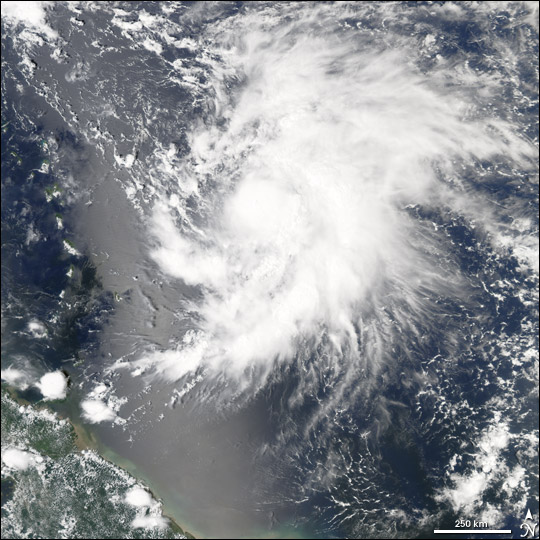 A tropical depression formed off the Brazilian coast on September 17, 2005. Once it was organized enough to have winds of over 62 kilometers per hour (39 miles per hour), it was classified as a tropical storm and given the name Philippe, becoming the 16th named storm system of the 2005 hurricane season. It continued to gather strength, becoming a category 1 hurricane just 24 hours later. Adding Philippe and Rita to the roster of storms in 2005, the year has already become one most active Atlantic hurricane seasons since records were started in 1851.

The Moderate Resolution Imaging Spectroradiometer (MODIS) on NASA’s Aqua satellite captured this image of Philippe at 1:05 p.m. local time while the storm was still not quite at hurricane strength, though it would reach this status only hours later. Philippe has the classic spiral structure of a hurricane, but there is little evidence yet of a well-defined eye in the storm’s center.

Forecasters were not too concerned about Philippe at the time of the satellite pass. The projected storm track will take Philippe nearly directly north, grazing the Antilles Island chain and perhaps Bermuda. But it was not predicted to make landfall or pose significant danger or threats to coastal areas.