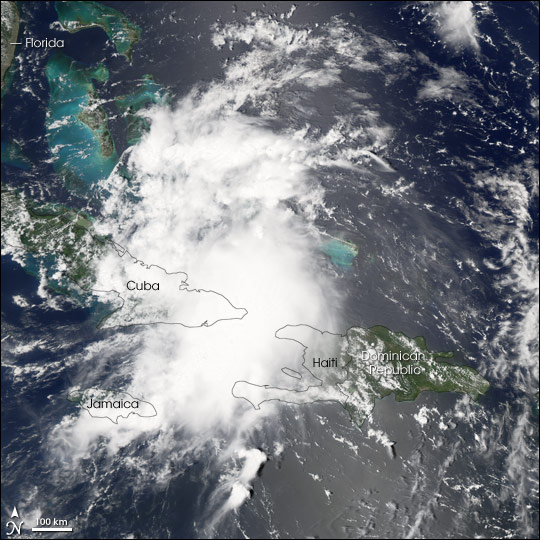 Hurricane Ernesto formed in the eastern Caribbean Sea on August 24, 2006. Within a day, it had become organized enough to be classified as a tropical storm and get named as the fifth storm of the 2006 Atlantic hurricane season. Ernesto built in power gradually as it moved westward and slightly north through the Caribbean Sea, just reaching hurricane strength on August 27 as it neared Hispaniola, the island on which the nations of Haiti and Dominican Republic are located.

Ernesto was the first storm of the 2006 Atlantic season to reach hurricane strength. The storm’s interaction with land robbed it of enough power to diminish it back to “tropical storm” status, but predictions as of August 29 are that favorable conditions north of Cuba may allow it to re-intensify to hurricane status before it comes ashore in southern Florida.

This photo-like image was acquired by the Moderate Resolution Imaging Spectroradiometer (MODIS) on the Aqua satellite on August 28, 2006, at 2:00 p.m. local time (18:00 UTC). Tropical Storm Ernesto at the time of this image was a well-developed storm system, but its interactions with Hispaniola and Cuba had distorted the former hurricane, disrupting its shape enough to prevent the formation of a well-defined eye. The spiral-arm cloud structure was also not as distinct as it would be in a well-developed hurricane. According to the University of Hawaii’s Tropical Storm Information Center, Ernesto had sustained peak winds of around 65 kilometers per hour (40 miles per hour) at the time Aqua MODIS acquired these data.