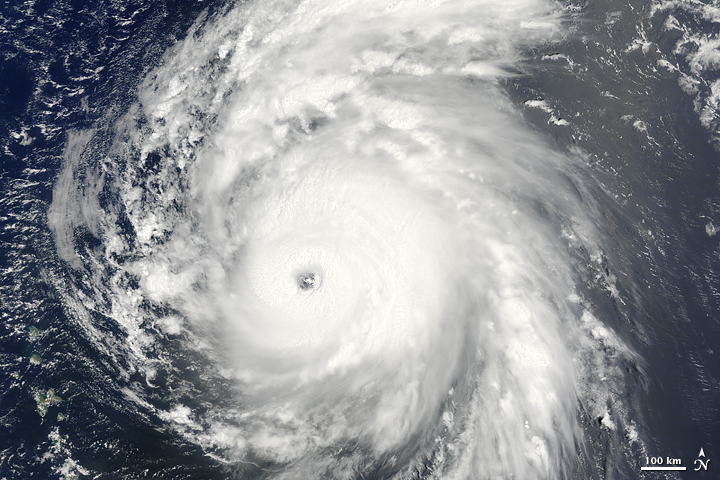 The 2009 Atlantic hurricane season was slow to get started, but Hurricane Bill appeared to be trying to make up for lost time. On average, the first hurricane of the season usually arrives by August 14, and Bill did not reach that benchmark until August 17. Within two days, however, Bill had strengthened into a Category 4 storm.

This image of Hurricane Bill was captured by the Moderate Resolution Imaging Spectroradiometer (MODIS) on NASA’s Terra satellite on August 19, 2009, at 10:45 a.m. local time in the Dominican Republic. At this time, Hurricane Bill had sustained winds of 135 mph, making it a powerful Category 4 storm.

The image conveys the warning that the National Hurricane Center gave in their 11:00 a.m. advisory on August 19: “Bill is a large storm, and hurricane force winds extend outward up to 80 miles from the center.” Bill stretches more than 1,200 kilometers (746 miles) across this image, and the storm’s partially cloud-filled eye is nearly 50 kilometers (31 miles) wide.