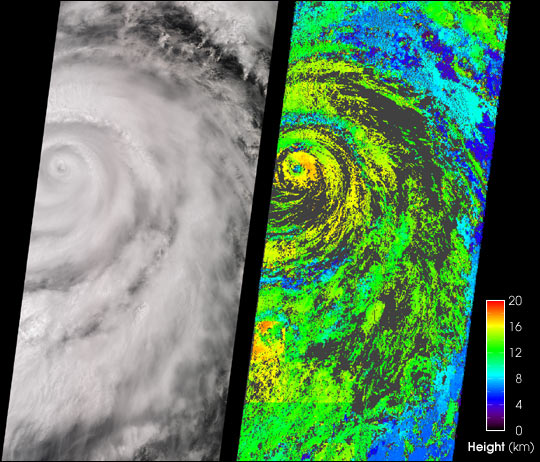 A classical intense hurricane is shown in this view of Juliette, captured by the Multi-angle Imaging SpectroRadiometer (MISR) on September 26, 2001.

On the left is a true-color image produced by MISR’s nadir (vertical-viewing) camera. Impressive spiral arms wrapped around the eye are apparent. Several areas of convective cloud can be discerned along the arms. The eye of the storm is centered at 18.8N latitude and 109.8W longitude (about 480 kilometers south of Cabo San Lucas, Mexico). On the right is the cloud-top height field derived using automated computer processing of the data from multiple MISR cameras. Relative height variations are well represented, such as the clearing within the storm’s eye. The stereoscopic data processing algorithm used to generate these results is still being refined. Future versions of this product may show modest changes in the height values compared to the preliminary values displayed here. Areas where heights could not be retrieved are shown in dark gray. The observations cover a 380-kilometer swath width.

On September 25, Air Force reconnaissance aircraft recorded minimum sea level pressures of 923 millibars—the lowest measurement for an eastern North Pacific hurricane since 1973. According to the National Hurricane Center, deep convection surrounding Juliette’s eye began to weaken on the morning of September 26. The strength of this potentially dangerous hurricane continued to diminish over the next few days as the storm approached cooler waters. It travelled in a north-northwest direction over the Pacific Ocean until reaching the tip of Baja Peninsula, where the heaviest rainfall and winds were confined. Juliette was downgraded to a tropical storm on September 29, and to a tropical depression on September 30. The National Hurricane Center predicted Juliette’s cyclonic circulation to be mostly dissipated by October 4.