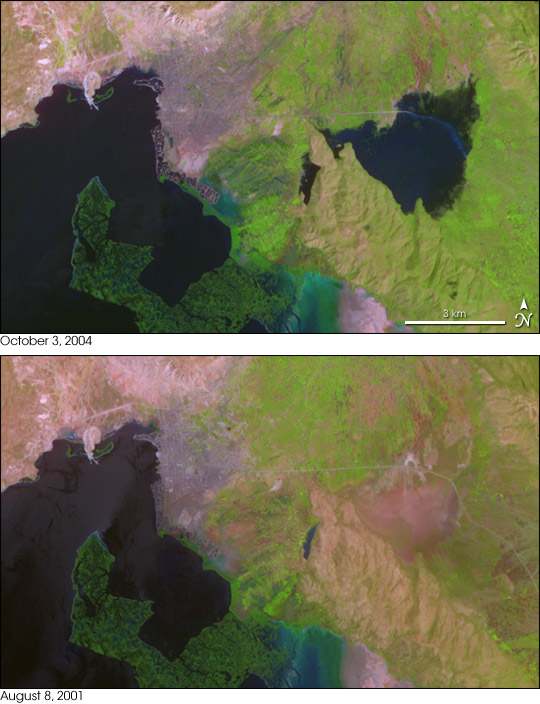 The floods that claimed the lives of at least 1,500 Haitians and left as many missing, also filled a large lake basin outside of Gonaives. The basin, which was a dry dust bowl on August 8, 2001, was still completely covered with water on October 3, 2004, two weeks after Hurricane Jeanne’s heavy rains induced the flooding. Some of the water may have been present before the floods, but the recent influx of water has pushed the lake far beyond its shores. According to the Associated Press, the lake has covered the primary road connecting Gonaives to Haiti’s capital, Port-au-Prince, with over a meter (four feet) of water, making food delivery difficult. The road can be seen here, a blurred white line under the dark blue water. The grey area at the end of the road near the shore is Gonaives.

These images were acquired by the Advanced Spaceborne Thermal Emission and Reflection Radiometer (ASTER). They were made by combining the infrared, near infrared, and red wavelengths (ASTER bands 4, 3, & 2). In this treatment, bare land appears pink, healthy croplands are light green, and concrete structures such as city buildings have a grey or deep purple tone.