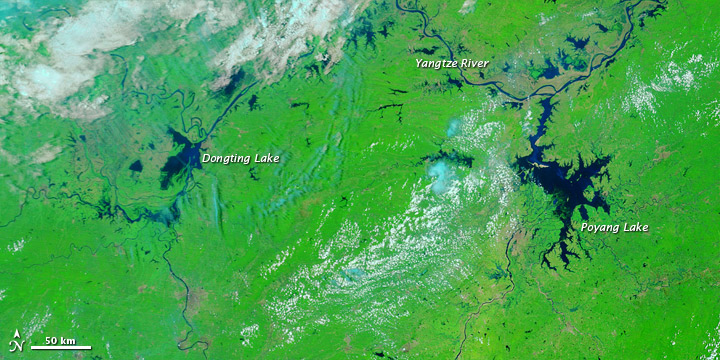 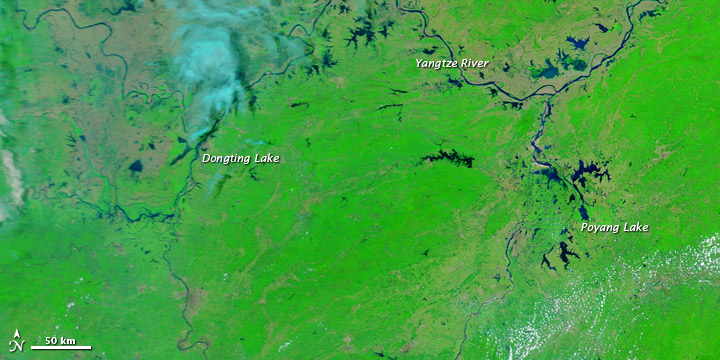 Water levels remained high in Dongting and Poyang Lakes in southeastern China on June 27, 2011. The Moderate Resolution Imaging Spectroradiometer (MODIS) on the Terra satellite captured the top image the same day. For comparison, the bottom image shows the area on May 28, 2011.

These false-color images use a combination of visible and infrared light to increase contrast between water and land. Water varies in color from medium blue to navy. Depending on land cover, areas that are not under water range from green to brown. Clouds are pale blue-green or nearly white.

In late May, Poyang Lake is an assortment of small, isolated water bodies. One month later, the water bodies have merged into a swollen lake. Meanwhile, Dongting Lake has multiplied in area.

The recent floods followed months of devastating drought, China Daily reported. Prior to the torrential rains, 3.5 million people endured water shortages. Although the rain brought much-needed moisture, it also brought deadly floods and landslides. As of June 28, nearly 100 people had died and about 27,000 homes had been destroyed.