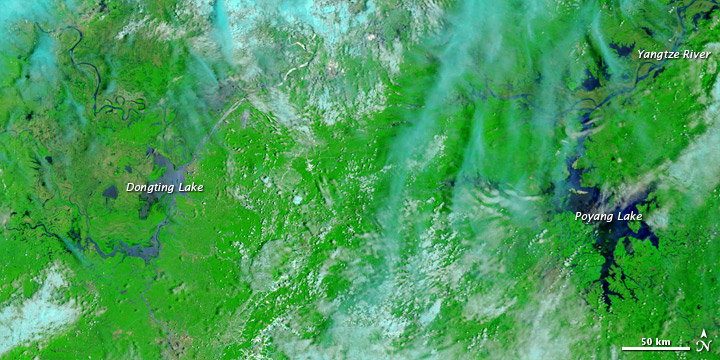 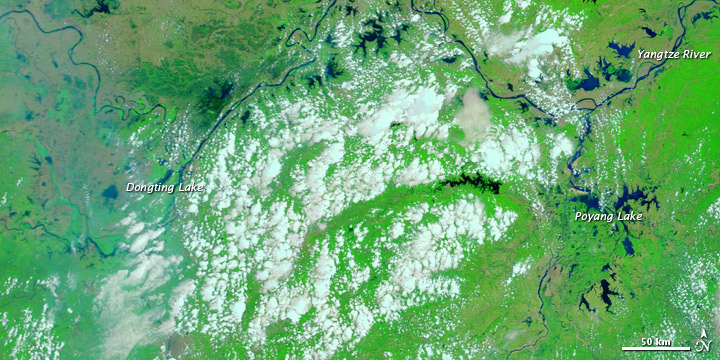 The Moderate Resolution Imaging Spectroradiometer (MODIS) on the Terra satellite captured these images on June 23, 2011 (top), and May 26, 2010 (bottom). Both images use a combination of visible and infrared light to increase contrast between water and land. Water varies in color from electric blue to navy. Vegetation is green. Clouds are pale blue-green.

Compared to conditions one month earlier, the image from June 2011 shows significantly swollen lakes. In May, Poyang Lake looks like a constellation of isolated water bodies; in June, the water bodies have coalesced. Meanwhile, Dongting Lake is barely visible in May, and conspicuous in June. The light color of Dongting Lake in June probably results from the angle of sunlight, but might also result from a heavy sediment load delivered by flood waters.

This is not the first time Poyang Lake has risen in response to flooding. The lake swelled in June 2007 as well.

Flooding in Colombia and Venezeula

February is typically the dry season in northern South America, but in 2005, unusual torrential rains triggered deadly floods in Venezuela and Colombia.