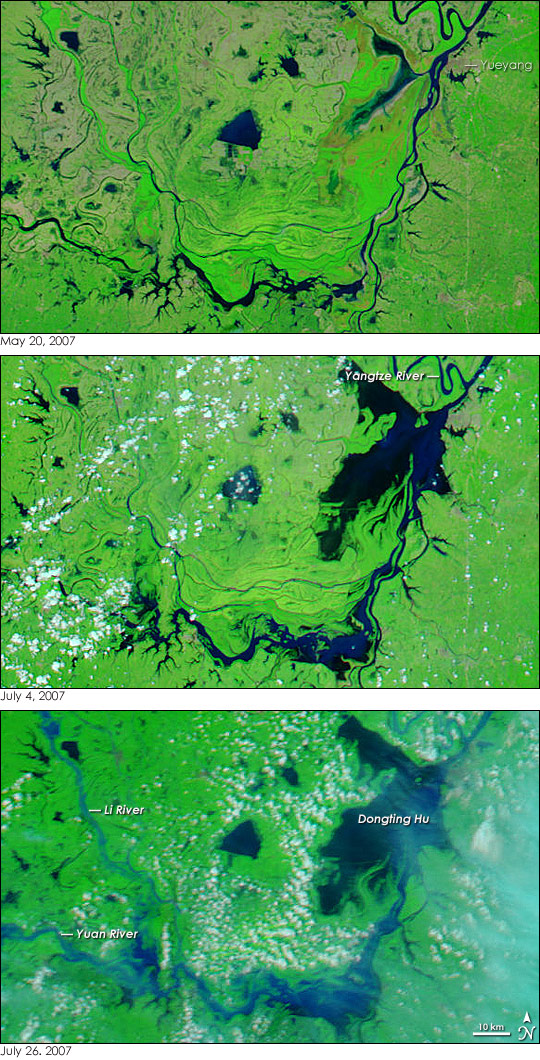 Apart from being China’s second-largest fresh-water lake, Dongting Hu is a natural flood basin for the Yangtze River in central China. Every year, between June and September, the shallow lake fills with water when the Yangtze River rises as a result of melting snow at its headwaters and summer rains along its length. This series of images, captured by the Moderate Resolution Imaging Spectroradiometer (MODIS) on NASA’s Aqua and Terra satellites, shows the lake filling between May and July 2007.

In late May, top, Dongting Lake was nearly dry. A drought the previous year left water levels low. After a rainy June, the lake had grown in three distinct lobes (east, west, and south) as shown in the center image. By July 26, the east and west lobes of Dongting Lake had grown together, and the southern portion of the lake had also filled out. The Yuan and Li Rivers, which feed the lake in the south, were also swollen. Loaded with light-scattering sediment, the water in the rivers is dusty blue, while the clearer or deeper water in the lake is black.

The images were made with infrared and visible light to increase the contrast between water and land. Plant-covered land in this richly vegetated region is bright green. Clouds are pale blue and white. The lower image, from July 26, is blurred by a thin veil of haze. Cities, which are most visible along Dongting Lake’s eastern shore, are gray-brown. The largest city shown in the images is Yueyang in the top right corner.

The floods shown in this image pushed an estimated two billion rats out of their habitat near the lake’s shores. The rats swarmed over farmland and destroyed up to 1.6 million hectares (4 million acres) of crops, said China Daily. Dongting Lake is just one region that experienced severe flooding in the summer of 2007. Unusually heavy summer rains caused widespread flooding throughout central China, particularly in the Huai River basin.