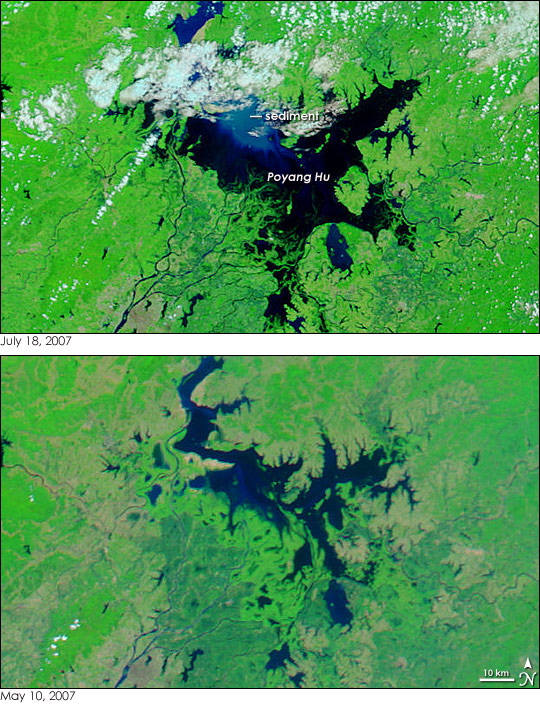 Unusually heavy summer rains led to widespread flooding across central China in June and July 2007. On July 18, the Moderate Resolution Imaging Spectroradiometer (MODIS) on NASA’s Terra satellite captured the top image of the flood-swollen Poyang Hu (Hu is Chinese for “lake”) in China’s southern Jiangxi Province. The lake is the largest fresh-water lake in China, but its size fluctuates seasonally. During the summer rainy season, Poyang Lake can be more than 1,000 square kilometers larger than its dry-season extent. By July 18, the lake was certainly much larger than it had been on May 10, when Aqua MODIS acquired the lower image. In these images, made with a combination of infrared and visible light, water is dark blue or black. Sediment lightens the color of the water. The land around the lake is covered in bright green vegetation spotted with silvery-gray cities. Bare or sparsely vegetated land is tan, and clouds are white and pale blue.

As of July 16, more than 105 million people had been affected by flooding throughout China since mid-June, with 3.6 million evacuated from their homes, said the International Federation of Red Cross and Red Crescent Societies (IFRC). In mid-July, the most severe flooding occurred on the Huai River, north of Poyang Lake. Daily images of Poyang Lake are available from the MODIS Rapid Response System.