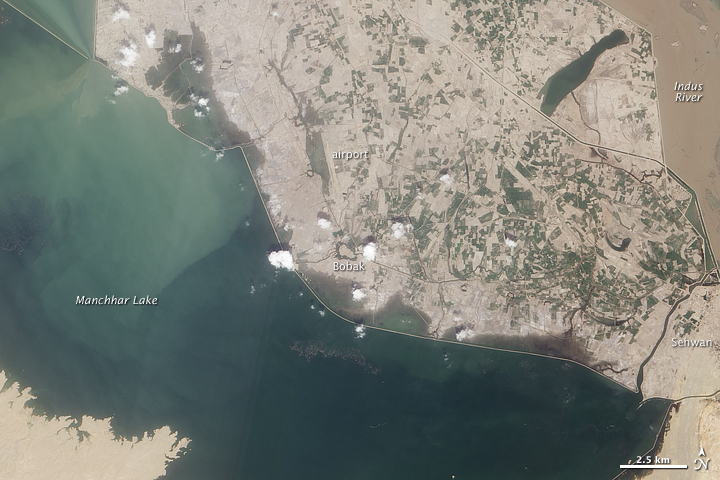 Regional flooding had pushed Pakistan’s Manchhar Lake to dangerous levels by mid-September 2010. Although accounts varied as to whether embankments along the lake had actually breached, flooding along the lake’s margins was apparent in an image from the Advanced Land Imager (ALI) on NASA’s Earth Observing-1 (EO-1) satellite. Acquired September 15, 2010, this natural-color image shows floodwaters extending beyond the lake’s normal boundaries where the water body nears the Indus River. Flooding appears particularly severe around the city of Bobak.

Manchhar Lake is Pakistan’s largest freshwater lake, and its water level varies considerably over time. The water level in the lake in late summer 2010, however, was unusual if not unprecedented. Severe monsoon rains in the summer of 2010 led to a dam failure on the Indus River, which subsequently split in two. Floodwaters formed a giant, arc-shaped lake on what was normally cultivated land. At the end of the newly created water body, Manchhar Lake became the receptacle for massive amounts of water.

On September 16, 2010, the International Herald Tribune reported that Manchhar Lake was receiving an inflow of 40,000 cubic feet per second (cusecs), compared with an outflow of just 10,000 to 12,000 cusecs. According to multiple news reports, Manchhar Lake had reached its capacity, and authorities scrambled to lower the lake level, including diverting water into the Indus River. Meanwhile, the Pakistan Observer reported, torrents of floodwater from the lake’s canals had inundated at least 60 villages.

By the time Manchhar Lake began to overflow, the flooding in Pakistan that occurred during the summer of 2010 had proven to be the most damaging natural disaster in the country’s history. The floods had killed more than 1,750 people, displaced some 6 million more, and affected 20 million Pakistanis in some way. Aid agencies warned that, without emergency food and shelter, millions of citizens could perish.