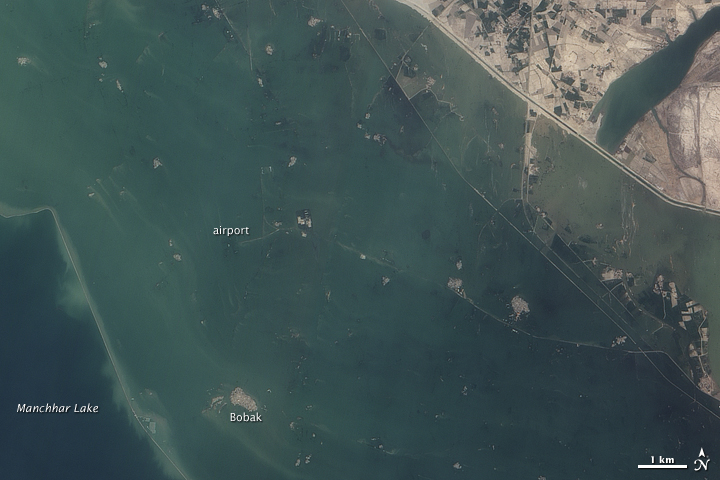 Heavy monsoon rains in the summer of 2010 caused the formation of a giant floodwater lake west of the Indus River. The massive lake terminated at Manchhar Lake (also Manchar Lake), which began rising rapidly. Authorities scrambled to divert excess water into the Indus River, and on September 20, the International Herald Tribune reported progress in lowering the lake level. A few days later, however, the Tribune reported that the lake was rising again.

The Advanced Land Imager (ALI) on NASA’s Earth Observing-1 (EO-1) satellite captured this natural-color image on September 18, 2010. It shows a flooded area along the northeastern margin of Manchhar Lake. An area of land above water appears in the upper right corner, while most of the area shown in this image is submerged.

The best way to interpret this picture is to compare it to another ALI image of roughly the same area acquired three days earlier. Almost all of the submerged area in this image was above water on September 15. In this image, only isolated patches northeast of Manchhar Lake poke above the floodwater. Sehwan airport and most of Bobak are underwater.

As waters rose along Manchhar Lake, flood waters were receding in other parts of the country, although effects lingered. On September 20, the Tribune reported that, near the coast, Pakistan authorities were trying to plug a breach near the city of Thatta, which had narrowly missed severe flooding. In nearby Sujawal, flood waters had receded throughout most of the city, but low-lying areas remained underwater. Meanwhile, the World Health Organization warned that Pakistan could face up to 2.2 million cases of malaria over the next six months.