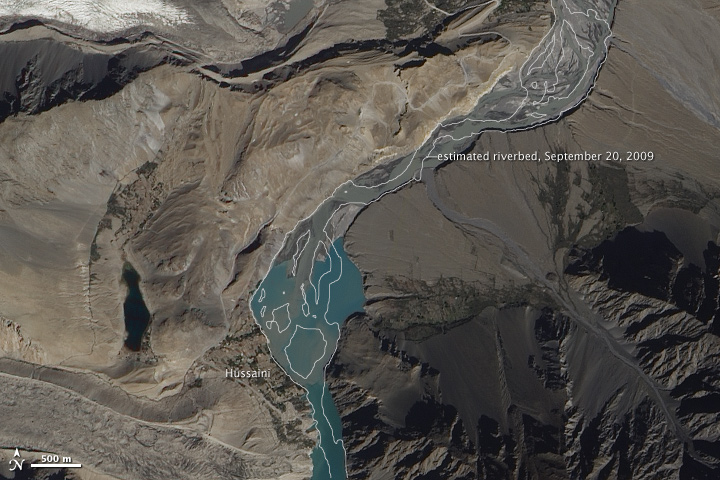 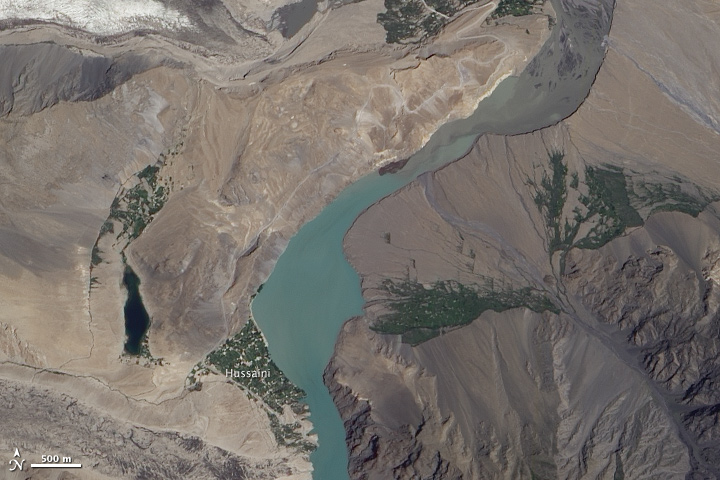 A landslide near Attabad, Pakistan, dumped tons of rock into the Hunza River in early January 2010. The natural dam blocked the river, causing a lake to grow behind it and flooding towns, roads, and fields for miles. Bridges across the Hunza River were submerged and the Karakorum Highway, the major road through the region and a significant trade route with China, was cut off. By late May, water reached a spillway that had been excavated to relieve pressure and to prevent a catastrophic outburst flood. Geoloigist David Petley reported that the lake level peaked in early July and has been gradually declining as the flow of water into the lake from melting glaciers has decreased and the spillway has expanded to let more water out of the lake.

The top natural-color image, taken by the Advanced Land Imager (ALI) on NASA’s Earth Observing-1 (EO-1) satellite on October 3, 2010, shows the decline in water levels at the upstream end of the lake since July (lower image). An estimate of the river’s course as of September 2009, based on satellite imagery from the ASTER instrument on NASA’s Terra satellite, is displayed on the October image.

Since July, the lake has retreated significantly near the town of Hussiani. Muddy islands formed by the braiding pattern of the river have appeared again after months underwater. The river has been returning to its former bed as the water has retreated. The change since August 23, however, is only slight, suggesting that the new lake may be temporarily stabilizing at this size. The long shadows in the October image reflects the change of seasons compared to the more direct light of mid-summer.