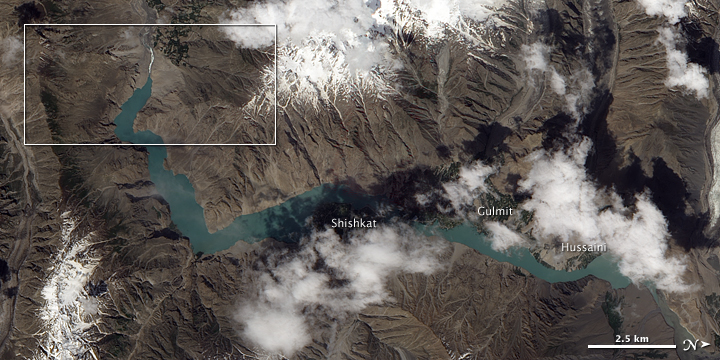 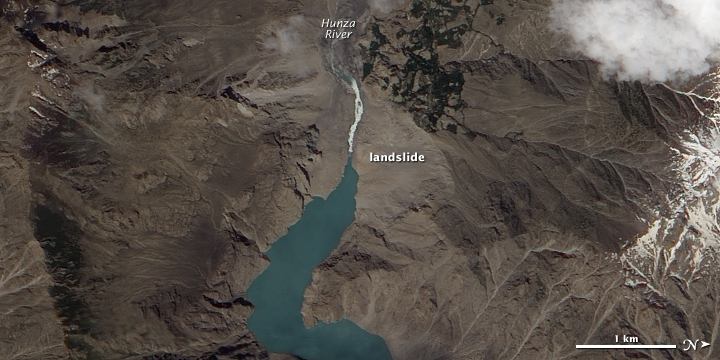 A landslide in early January of 2010 filled part of the Hunza Valley in northwestern Pakistan, forming a natural dam across the Hunza River at Atta Abad. By early June, a substantial lake had built up, backing up the waters of the river past the settlements of Shishkat, Gulmit, and Hussaini. In this image, taken on July 2, 2010, the lake appears to have overtopped the dam, and water was streaming out through a man-made spillway.

The Advanced Land Imager (ALI) on NASA’s Earth Observing-1 (EO-1) satellite acquired this natural-color image of the landslide lake on July 2, 2010. This image has been rotated, so north appears at right. The Hunza River flows toward the south, and water backed up behind the landslide has slowly spread toward the north.

According to geologist David Petley of the International Landslide Centre in the United Kingdom, the outflow channel is restricted by a few very large boulders, which may be preventing the channel from eroding as rapidly as would otherwise be expected. Local authorities have discussed the possibility of using explosives to further clear the spillway and allow the lake to drain more quickly.