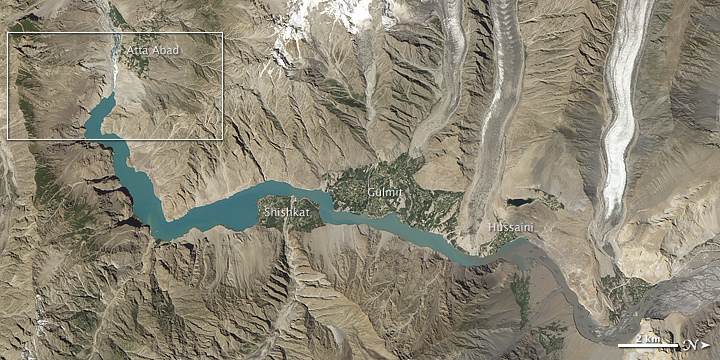 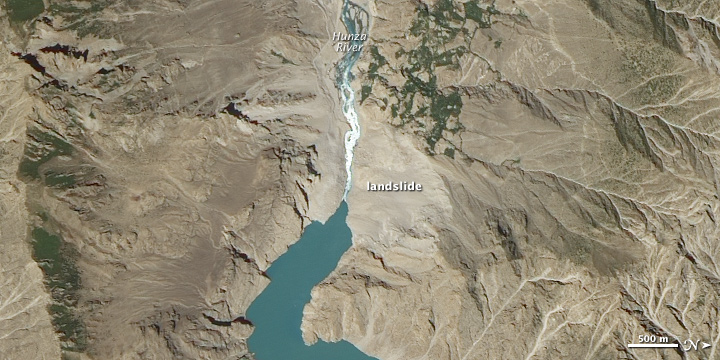 On January 4, 2010, a landslide struck northern Pakistan’s Hunza Valley, destroying a village and blocking the Hunza River. As water backed up behind the earthen dam, the rising lake forced locals to flee their homes. It also cut off overland access to the outside world by submerging a bridge. Engineers and army laborers carved a spillway through the dam, and water finally began flowing through it in late May 2010.

Although the spillway relieved pressure on the landslide lake, the Hunza Valley did not return to normal. Acquired on August 3, 2011, by the Advanced Land Imager (ALI) on NASA’s Earth Observing-1 (EO-1) satellite, this natural-color image shows the earthen dam and lingering lake behind it. The top image is a wide-area view, and the bottom is a close-up of the boxed area from the top. Both images are rotated so that north is at right.

At the southwestern end of the lake, whitewater rushes through the spillway. Elsewhere, the water appears blue-green.

Geologist David Petley (International Landslide Centre at Durham University) has tracked the effects of the Hunza landslide since January 2010. He concluded that the Hunza lake levels probably stabilized by early July 2010, thanks to the spillway. Over the following 13 months, water flowing through the spillway eroded the landslide dam, widening the flow channel. Yet flow out of the lake and down the river valley remained constrained by the narrow inlet through the dam crest. Between July 2010 and August 2011, that crest changed little, Petley observed.