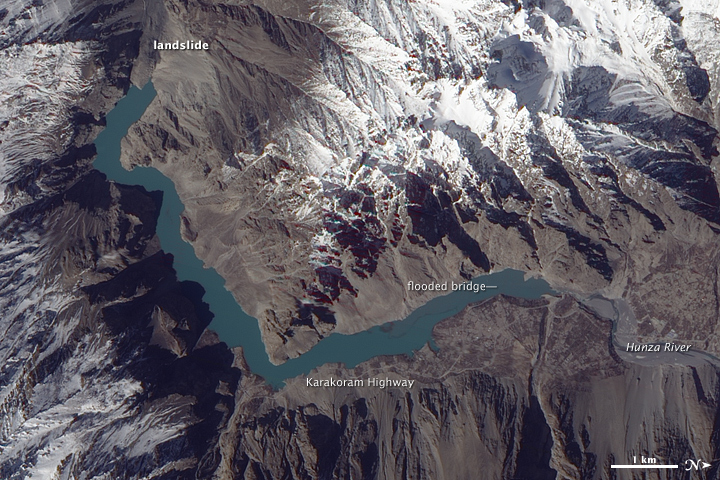 On January 4, 2010, a landslide occurred in the Hunza Valley of northern Pakistan. The initial disaster buried the village of Attabad, destroying 26 homes and killing 20 people. As the weeks passed, the problems compounded because the landslide did more than destroy a village. It also blocked the Hunza River, creating a 7-mile- (11-kilometer-) long lake that inundated several villages and submerged 3 miles (5 kilometers) of the Karakoram Highway. The highway is frequently blocked by rockfalls, most of which can be cleared in days, but work was still in progress at Attabad in mid-March 2010.

On March 16, 2010, the Advanced Land Imager (ALI) on NASA’s Earth Observing-1 (EO-1) satellite captured this true-color image of the lake created by the landslide of January 4. (Note that north is on the right.) Dark rock covers the river in the upper left corner of the image, and the turquoise V-shaped lake stretches out behind the slide. Near the temporary lake, the Karakoram Highway is a faint meandering line of pale brown. A bridge across the Hunza River has been submerged by the rising waters. The bridge connects the settlements of Shaskat (or Shiskit) and Gulmit on the region’s only route to and from China.

Besides displacing some 1,500 people as it flooded their homes, the lake cut off everyone between Attabad and the submerged bridge—an estimated 3,000 people—from the outside world, according to news reports. Chinese engineers had begun working with members of Pakistan’s army to carve a spillway through the landslide by late January, but the size of the landslide made for slow progress.

Geologist David Petley reported that, as of January 25, the lake’s level was rising roughly 1.1 meters (3.6 feet) per day, and as of February 10, water was rising roughly 60 centimeters (24 inches) per day. By March 11, water was seeping through the rocky dam, likely from the newly created lake. The seepage raised fears that the water might breach the dam and flood villages downstream.