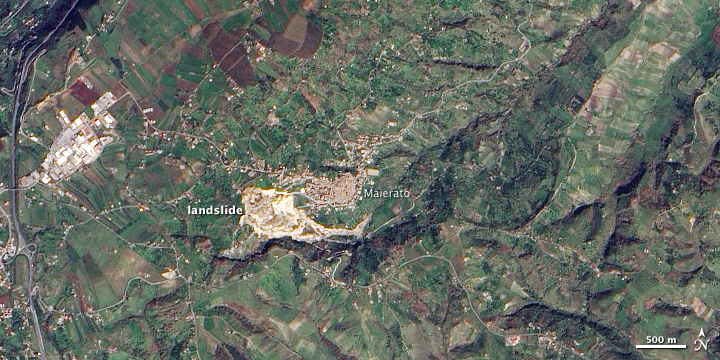 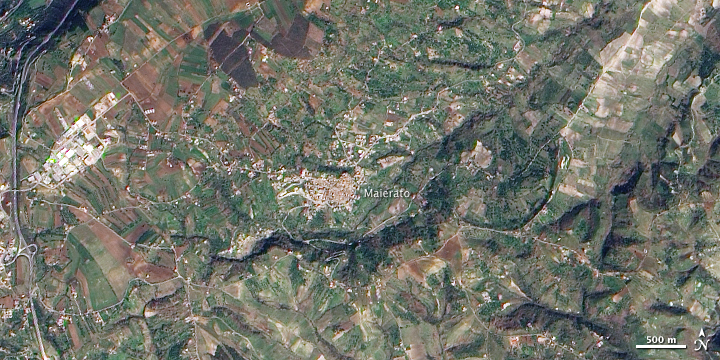 The Advanced Land Imager on NASA’s EO-1 satellite captured this clear view of a landslide outside the southern Italian town of Maierato on March 14, 2010. The slide occurred on February 15 and may have been caused by heavy rain. The freshly exposed soil is pale tan in the top image. The lower image, taken March 13, 2003, shows that the slide area was a steep, plant-covered hill before the landslide occurred. The area around the slide is agricultural, characterized by geometric fields dotted with light-colored structures and lined with white roads. The town of Maierato is the cluster of buildings in the center of each image.

The slide occurred on the west side of the town. A comparison of the two images reveals that the slide buried several roads, but the area did not appear to be populated. About 200 residents of Maierato were evacuated, reported BBC News. A video of the slide shows the hillside slowly moving forward and crumbling as if pushed from below.

Gravity constantly tugs downward on a slope, but only when gravity’s force exceeds the strength of the rocks, soils, and sediments composing the slope does land begin to slide down hill. Landslides often occur in conjunction with other events, and rainfall in the Maierato region likely initiated this slide.

The landslide affecting Maierato was one of perhaps 100 landslides in the southern Italian region of Calabria, although most of the landslides reportedly did not affect populated areas.