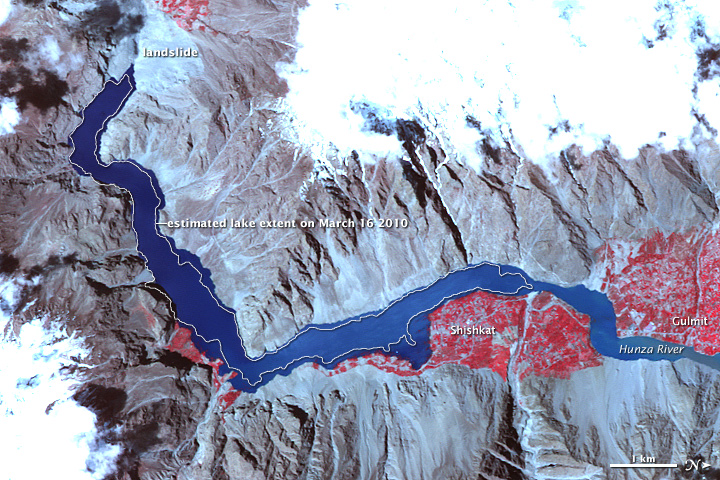 On January 4, 2010, a landslide dammed the Hunza River in northern Pakistan, creating a lake that threatened to overflow its earthen dam and flood downstream communities. By mid-March 2010, the lake was 7 miles (10 kilometers) long. By early May, the lake had expanded well beyond its mid-March extent. As spring progressed, warmer temperatures began melting snow, which raised the rate of inflow to the lake.

The Advanced Spaceborne Thermal Emission and Reflection Radiometer (ASTER) on NASA’s Terra satellite captured this false-color image of the landslide lake on the Hunza River on May 2, 2010. Blue indicates water, red indicates vegetation, and shades of beige and gray indicate bare rock. The approximate extent of the lake on March 16, 2010, appears as a white outline. This image has been rotated, so north is to the right.

The river-blocking landslide appears near the upper left corner of this image. Next to the landslide, water levels have risen compared to their mid-March extents, and higher water is evident along the entire lake. In mid-March, north of the landslide lake, the Hunza River was a narrow tributary. In this scene, however, the water body is swollen well past the previous lake extent.

Compared to the largely barren slopes nearby, low, broad plains along the river support abundant vegetation (red in this type of image) associated with settlements. Video footage of settlements along the rapidly growing landslide lake, however, shows partially submerged trees and homes, as well as residents demolishing their homes to salvage building materials.