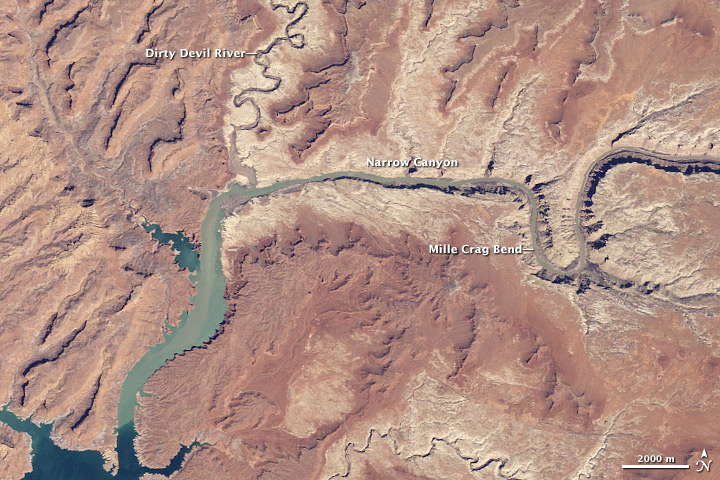 From the late 1990s through the middle of the 2000 decade, a multi-year drought in the Upper Colorado River Basin caused water levels in Lake Powell to plummet. As people’s demands on the river outpaced the rate of recharge, the deep, meandering reservoir dropped to only 33 percent of capacity in 2005. This image from April 2010 is the latest update in the Earth Observatory’s feature World of Change: Water Levels in Lake Powell, which documents changes in lake levels each spring since 1999.

The Landsat 5 satellite captured this view of the northeastern part of the lake on April 7, 2010. The Colorado River flows in from the east around Mille Crag Bend and is swallowed by the lake. At the west end of Narrow Canyon, the Dirty Devil River joins the lake from the north. As the reservoir bends sharply south, sediment in the water mixes and settles, and the water becomes first greenish, and farther downstream, a deep, clear blue. Water levels in 2010 were lower than they were a decade ago at this time of year, but they continued to be an improvement over the extremely low levels that occurred in 2005.

The peak inflow to Lake Powell occurs in mid- to late spring as the winter snow in the Rockies melts. According to the Bureau of Reclamation, the April 2010 inflow to Lake Powell was 94.5 percent of average, much greater than the 66 percent of average forecasted at the start of the month. According to the Bureau’s May 2010 summary, the larger-than-expected April inflow was likely due to an earlier-than-expected spring thaw, and so it probably was not a sign that total spring runoff volume would be larger than forecast.

A century of river flow records combined with an additional four to five centuries of tree-ring data show that the drought of the late 1990s and early 2000s was not unusual; longer and more severe droughts are a regular part of the climate variability in that part of the continent. Global warming is expected to make droughts more severe in the future. Precipitation declines combined with booming urban populations will present a significant challenge to Western water managers in the near future.