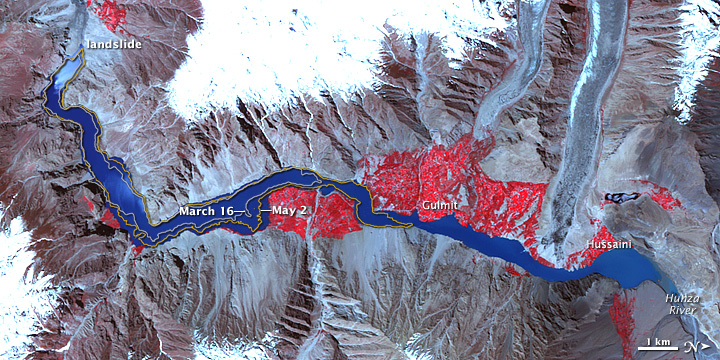 The lake building behind a landslide that blocked that Hunza River in Pakistan on January 4, 2010, appeared very close to reaching an overflow point in late May, according to geologist David Petley of the International Landslide Centre in the United Kingdom. Warmer temperatures in the mountains upstream were melting snow and causing the lake to rise.

This false-color image of the landslide lake was captured by the Advanced Spaceborne Thermal Emission and Reflection Radiometer (ASTER) on the Terra satellite on May 25, 2010. The image has been rotated so that north is at right; the river flows south through the image. Bare rock is gray-brown, water is blue, and vegetation is red.

The extent of the lake on March 16 and May 2 (based on earlier satellite images) are outlined on the image. In mid-March, the lake had backed up only to about the mid-point of the image; by May 2, it spanned about two-thirds of the scene. By May 25, it stretched across the entire scene.