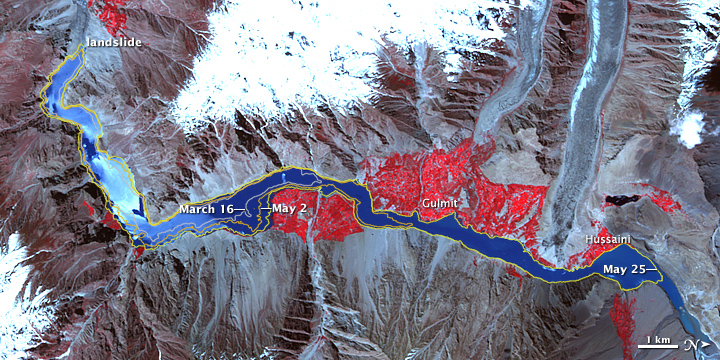 A lake created by a landslide in northwest Pakistan continued growing throughout the month of May 2010. The lake extended northward up the Hunza River, past the settlements of Gulmit and Hussaini. Meanwhile, the risk of a breach continued growing, according to geologist David Petley of the International Landslide Centre in the United Kingdom.

The Advanced Spaceborne Thermal Emission and Reflection Radiometer (ASTER) on the Terra satellite acquired this false-color image of the landslide lake on June 1, 2010. Water appears in varying shades of blue. Vegetation is red. Bare rock appears in shades of brown and gray.

This image has been rotated, so north appears at right. The Hunza River flows toward the south, and water backed up behind the landslide has slowly spread toward the north. Colored lines show the lake’s earlier extents: gray (March 16), burnt orange (May 2), and yellow (May 25). This image shows that, by June 1, the landslide lake had extended 2 to 3 kilometers north of its May 25 extent.