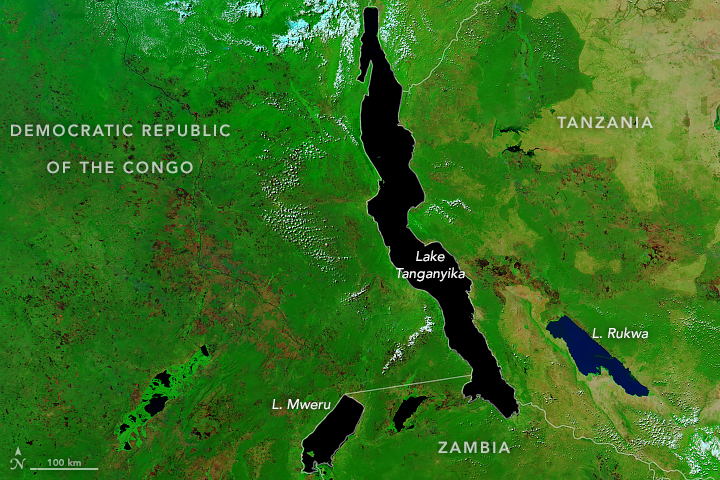 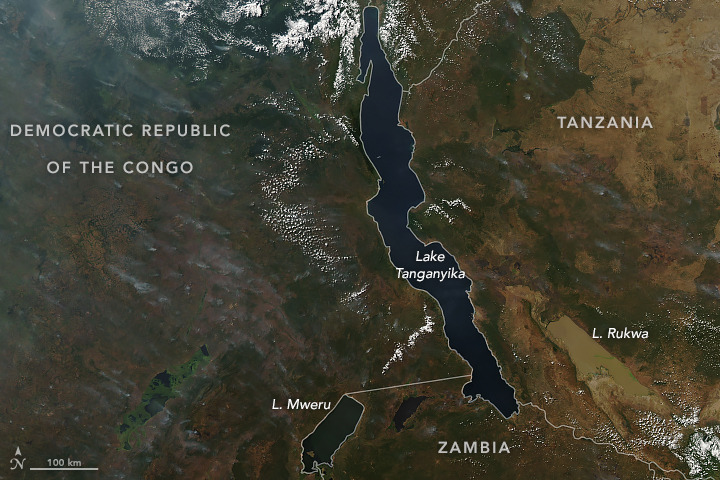 Long and short. Deep and shallow. Salty and fresh. Blue and brown. Although they sit just 100 kilometers (60 miles) apart in the East African Rift, Lake Rukwa and Lake Tanganyika offer stark contrasts in appearance and biodiversity.

Some of the physical differences are apparent in these images, which were acquired on June 18, 2019, by the Moderate Resolution Imaging Spectroradiometer (MODIS) on NASA’s Aqua satellite. The left image is false color to better differentiate between areas of water and vegetation. The image was acquired using a combination of wavelengths in visible light (band 1), near infrared (band 2), and short-wave infrared (band 7) ranges. Liquid water absorbs all three of these wavelengths and appears very dark or black. Sediment-laden water appears dark blue as sediments reflect visible light. Green represents vegetated land.

The right image shows the same scene in natural color. Lake Rukwa’s water appears brown and murky by comparison. Unlike the freshwater Lake Tanganyika, Lake Rukwa is an alkaline lake and contains salt pans by its southwestern ends. Like many salt lakes, Rukwa has no outlets and many inflowing rivers that can bring salts.

Perhaps the most obvious difference between the two lakes is the size. Lake Tanganyika is the world’s longest freshwater lake and second deepest; it holds about 17 percent of the world’s freshwater. Tanganyika has been compared to an ocean due to depths reaching 1,470 meters (4,820 feet). The lake supports about 1,500 species of animals, nearly half of which are only found in the lake.

Lake Rukwa is much smaller. Averaging about 3 meters (10 feet) deep, the lake’s water levels fluctuate depending on rainfall and inflow from the surrounding rivers. The highest water levels tend to occur during the rainy seasons in October and April. When the water is low, the lake sometimes separates into two basins. Explorers called the lake an “impossible swamp” because it would dry up while retaining a wet shoreline. Lake Rukwa has much less biodiversity, although it holds the largest population of crocodiles in Tanzania.

Despite their differences, the two lakes both face threats from human activities. In 2016, the Minister of State in the Vice President’s Office for Union Affairs and Environment declared that Lake Rukwa had experienced “colossal environmental degradation.” A recent bathymetric survey pointed out the lake’s declining water levels, stating the average depth had dropped from 9.5 meters (31 feet) to 3.4 meters (11 feet) in the past decade. The water level decreased due to dams and irrigation projects that limited water arriving from incoming rivers. In recent years, agricultural runoff has increased the suspended sediment in rivers that flow into Lake Rukwa—hence the brown, murky water color.

Lake Tanganyika has been subject to overfishing and illegal fishing. Some surrounding forests have also been cut down for firewood or to make room for farms, which leads to erosion and excessive runoff. Such sediments can disrupt breeding patterns in fish and threaten the lake’s biodiversity. 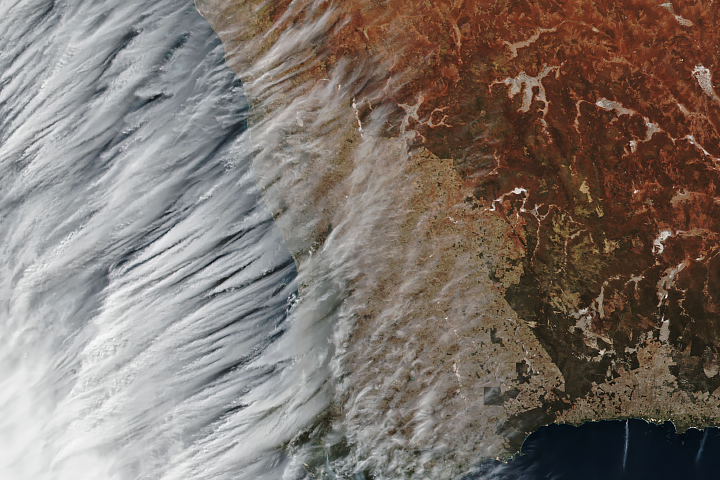