Drought and Air Quality in August 2010 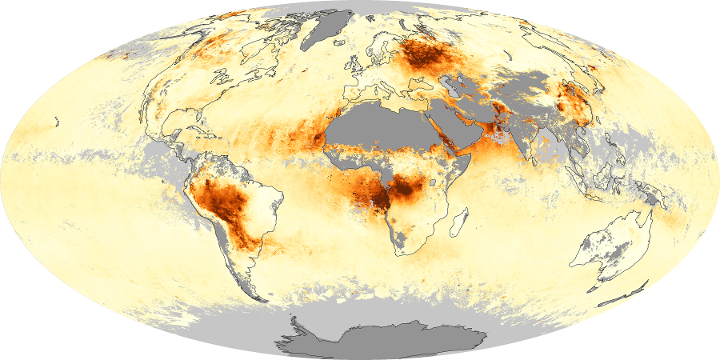 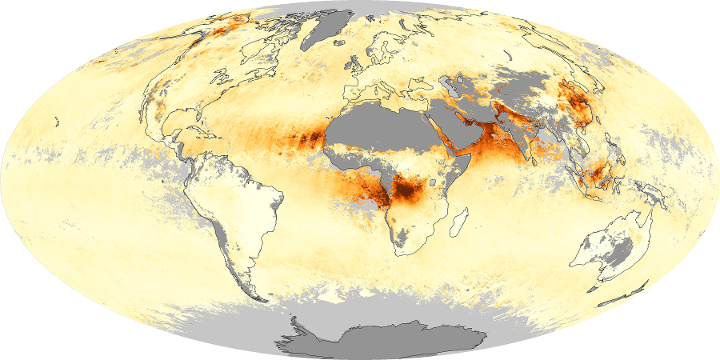 Air quality varies from day to day and year to year, influenced by both local and large-scale weather patterns. In August 2010, the skies in many parts of the world were marked by yellow-brown light filtering down through acrid, smoky air, or by gray-white haze blurring the horizon. Some of the large-scale weather patterns that dominated in August are reflected in the top map, which shows aerosols as measured by the Moderate Resolution Imaging Spectroradiometer (MODIS) on NASA’s Terra satellite.

Aerosols enter the atmosphere in a variety of ways, many of which are influenced by weather. Fires send up sooty smoke; wind kicks up dust and sand; and high temperatures cook the chemical soup emitted from tailpipes and industrial processes into a thick haze. High winds, drought, and heat waves can intensify fires, dust storms, and the formation of chemical aerosols.

Some of the highest aerosol concentrations in August 2010 occurred over Russia and South America. In Russia, drought and high temperatures baked plants and soils, making them prone to fire. When widespread fires broke out, they swathed the country in thick smoke. Drought also settled over the Amazon basin in South America, such that fires set to clear trees and brush quickly raged out of control. (See Fires in South America.) The smoke moved north along the Andes Mountains and covered much of South America.

The third area affected by drought was western Canada. While a number of wildfires burned in the drought-dried boreal forest, the smoke aerosols were not as dense as in South America or Russia.

Central Africa is also covered with thick aerosols. The lower image, from August 2009, shows that aerosols routinely gather over central Africa during August, when farmers use fire to clear land for crops and pasture.

The high concentrations of aerosols over northern Africa, the Arabian peninsula, and southwest Asia come from dust. Aerosols in China, Europe, and the United States are haze, largely from industry and automobiles.

Just as aerosol concentrations are influenced by the weather, they in turn can affect weather patterns. Depending on their shape and size, aerosols can either help clouds form or prevent them from forming. Aerosols also reflect or filter light, reducing the intensity of sunlight in a region and making temperatures cooler. They can also block light, absorb energy, and heat the atmosphere.

This global map shows high concentrations of aerosols, particles in the atmosphere, over drought-afflicted Russia and South America in August 2010.