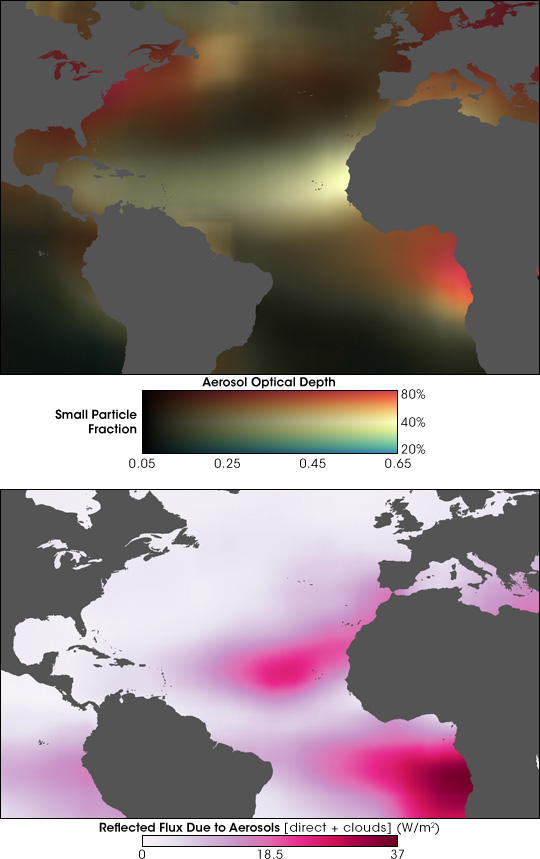 Climate-prediction scientists often talk about climate forcings—things that force the climate to change, usually by altering the amount of energy that enters and exits the Earth’s atmosphere. Most scientists consider aerosols the most challenging climate forcing to figure out because aerosols’ influences can contradict each other. Light-colored aerosols scatter and reflect solar radiation back into space; dark-colored aerosols absorb it. In many cases, aerosols increase cloudiness, but dark aerosols like the soot from forest fires can choke off cloud formation.

The images above show the results of a newly published study from scientists using NASA satellite data to observe the interaction of clouds and aerosols over the Atlantic Ocean between June and August 2004. The scientists documented that by increasing cloudiness and reflecting solar energy, aerosols provided a net cooling influence on the region during the three-month period.

The top image shows which of two categories of aerosols— large and small—was observed by the Moderate Resolution Imaging Spectroradiometer (MODIS) on the Terra satellite in four separate latitude zones in the Atlantic Ocean. Increasing amounts (aerosol optical depth) of large aerosols are shown in shades of dull to bright yellow; increasing amounts of small aerosols are shown in shades of dull to bright red. The lower image shows the net effect of aerosols on the amount of energy that the Earth’s atmosphere reflected back to space over the study period. The largest increases in reflection (bright pink) occurred to the west of Africa’s Sahara Desert and right off the coast of Southern Africa.

The scientists studied the relationship between aerosols and shallow clouds—those located at an average height of 1,200 meters—in each of four latitude zones in the Atlantic Ocean. In each of these “natural laboratories” the type of aerosols was different: urban pollution between 30 and 60 degrees North; dust from the Sahara between 5 and 25 degrees North; smoke from seasonal fires in Africa between 5 degrees North and 20 degrees South; and salts from wind-whipped sea spray between 20 and 30 degrees South.

Despite the differences in the type of aerosol, the effect on shallow clouds was the same: as aerosols increased, so did the area covered with clouds. But scientists always remember that just because two things are related that doesn’t mean that one thing caused the other. In this study, for example, the fact that clouds increased when aerosols increased could be because the weather conditions that produce these clouds also caused the aerosols to build up in the air at the same time. Scientists conducted statistical tests on the cloud and aerosols observations from each "natural laboratory" to calculate how much of the increase in clouds was due to weather and how much was due to aerosols.

Scientists trying to estimate how much polluted clouds could change the Earth’s energy balance have often focused on how much brighter a polluted cloud would be than a non-polluted one (covering the same area). The additional brightness comes from the fact that a cloud with many aerosols has more numerous, but smaller droplets, each of which scatters and reflects incoming sunlight. This study shows that unless they take into account the greater area covered by clouds when aerosols are present, scientists may be seriously underestimating the climate-forcing potential of aerosols.