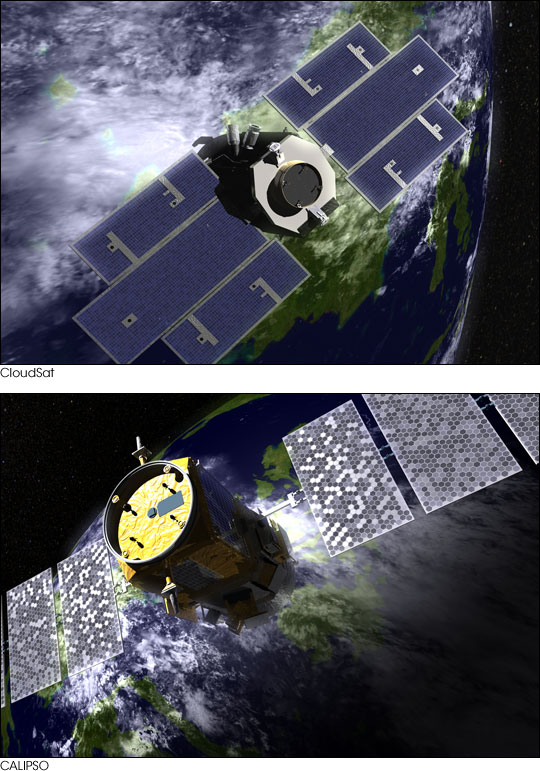 In late April 2006, NASA scientists and engineers were eagerly anticipating the launch of NASA’s newest Earth-observation mission, a pair of satellites that will answer questions about clouds and aerosols, tiny liquid or solid particles suspended in the air. The images above show an artist’s drawings of the two spacecraft. The top image is the CloudSat satellite, while the bottom image is the CALIPSO satellite, which is short for “Cloud-Aerosol Lidar and Infrared Pathfinder Satellite Observations.” Together, CALIPSO and CloudSat will provide new perspectives on Earth’s clouds and aerosols, answering questions about how they form, evolve, and affect water supply, climate, weather, and air quality.

Both clouds and aerosols can have competing effects on the climate depending on their type, location, and length of stay in the atmosphere. Some clouds can cool the Earth’s surface by blocking incoming sunlight, but others can heat the atmosphere by absorbing and radiating energy emitted by the Earth’s surface. Bright, reflective aerosols, such as sulfates, can reflect sunlight back into space, but dark-colored aerosols, such as soot, can absorb it. To make matters more difficult, clouds and aerosols also interact. In some situations, aerosols increase cloud formation by providing “seeds” on which condensation can occur. But in other cases, aerosols may suppress cloud formation by absorbing radiation, heating the layer of atmosphere where they are located, and suppressing the convection (rising) of air that often leads to clouds. Figuring out which of these contradictory behaviors has the greatest influence on climate is one of the biggest challenges facing Earth-system scientists today.

CloudSat will provide the first global observations of clouds using a satellite-based radar, revealing thickness, height, water and ice content, and a wide range of precipitation data. The CALIPSO satellite will provide vertical, curtain-like images of the atmosphere on a global scale using a lidar. (A lidar is similar to a radar, but uses short pulses of laser light instead of radio waves.) CALIPSO will allow scientists to determine the altitudes of clouds and aerosol layers (and how much the layers overlap), to identify the composition of clouds, and to estimate the abundance and sizes of aerosols.