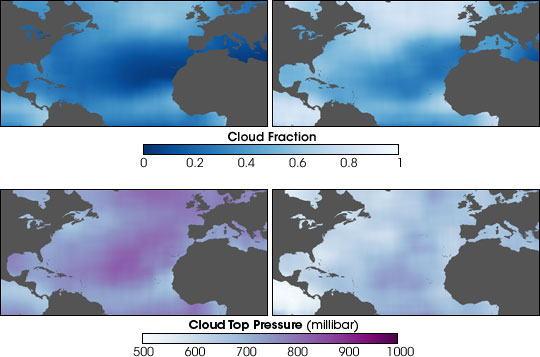 Of all the things that influence Earth’s climate, the tiny particles called aerosols may win scientists’ award for “least predictable.” Not only do aerosols scatter, absorb, and reflect energy that enters and exits Earth’s atmosphere, but they also tinker with the size, shape, and location of clouds and how much rain they produce. New research based on cloud and aerosol observations from the Moderate Resolution Imaging Spectroradiometer on NASA’s Terra satellite demonstrates that when aerosols were present in the air over the Atlantic Ocean, convective clouds (the tall puffy clouds that produce thunderstorms) covered a larger area and grew taller than they did on low-haze days.

The top pair of images shows the fraction of sky that was filled with convective clouds on low-haze days (left) versus hazy days (right) from June-August 2002. Deepest blue indicates cloud-free skies, while white indicates completely cloudy skies. On hazy days, cloud fraction increased dramatically across broad areas such as the northern Atlantic Ocean between North America (left) and Europe (right), and in smaller, more localized regions off the west coast of Africa (lower right).

Not only did aerosols change the area covered by convective clouds, they also changed how tall the clouds became. The bottom pair shows a comparison of cloud top pressure on low-haze days (left) versus hazy days (right). Generally, air pressure decreases as altitude increases, so the lower the pressure at the top of the cloud, the higher that cloud is in the atmosphere. When haze was present, cloud top pressures dropped, a sign that clouds were climbing higher into the atmosphere than they did on days with low amounts of aerosols.

Although some of the relationship between changes in convective clouds and the presence of aerosol may be due to meteorological conditions that bring both aerosols and clouds to the area, the scientists conducted additional tests on the observations to verify that the aerosols themselves, and not just the weather conditions, caused the changes MODIS observed.

These large-scale changes were accompanied by micro-scale changes in the clouds. Individual cloud droplets were smaller and more numerous when aerosols were present because each aerosol particle attracts water vapor and serves as a seed for cloud droplets. How could smaller droplets lead to taller clouds? Mainly, scientists think, it’s because water vapor gets spread out among all the aerosols in a cloud, which slows or prevents the formation of big droplets—rain. Falling raindrops create downdrafts that counter the upward rush of air that produces tall, towering clouds. Without these competing downdrafts, rising air carries the small droplets higher and higher into the atmosphere.

Scientists have known for many years that aerosols can modify cloud droplets, but this study offers a rare big-picture view of the changes they can make to cloud structure over a large area of the planet. That aerosols can modify the clouds over much of the Atlantic Ocean strongly suggests that human-produced and naturally occurring aerosols influence Earth’s water cycle and energy balance. By changing the properties of clouds—which themselves are the biggest controller of how much energy enters and exits the atmosphere and therefore the climate system—aerosols add another layer of complexity to their ability to influence climate. Look for additional explanations of the impact of aerosols on clouds and climate in tomorrow’s Image of the Day.