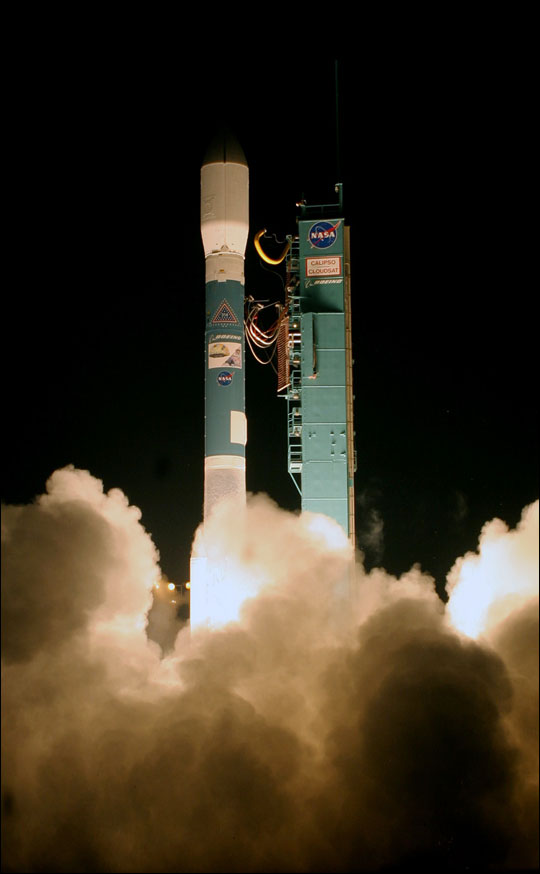 In the wee hours of the morning on April 28, 2006, a bright pulse of light pierced the foggy darkness at Vandenberg Air Force Base in California. A Boeing Delta II rocket carrying NASA’s two new Earth-observation satellites blasted off at 3:02 a.m. Pacific Daylight Time from Space Launch Complex 2, billowing clouds of exhaust. This image shows the rocket at lift off. The two satellites are contained in the white “nose” of the rocket, which is on the left. The launch tower (support structure) is on the right.

After 62 minutes, the CALIPSO satellite separated from the rocket, followed by the CloudSat satellite 35 minutes later. Over the next six weeks, scientists will conduct system and instrument checks, and then they will insert the satellites into their final orbits, in which they will fly roughly 15 seconds apart at an altitude of about 705 kilometers (438 miles) above the Earth.

Both spacecraft carry “active” remote sensors, sensors that don’t simply observe light and energy, but actively probe the atmosphere by sending out pulses of light or radio waves and then measuring how much of the signal is scattered back by clouds or particles (aerosols) in the atmosphere. Active sensors can penetrate into different layers of the atmosphere or clouds, to get a picture of what is going on throughout the entire vertical column of the atmosphere.

CloudSat carries a cloud-profiling radar, while CALIPSO (short for “Cloud-Aerosol Lidar and Infrared Pathfinder Satellite Observations”) has a lidar, which is similar to a radar, but uses laser light pulses instead of radio waves. CloudSat can detect clouds and distinguish between different sizes and types of cloud particles and precipitation. CALIPSO can detect aerosol particles and distinguish between aerosol and cloud particles. Together these two missions will help scientists answer questions about how clouds and aerosols influence Earth's energy balance, water cycle, air quality, and climate.

For more information on CloudSat and CALIPSO, including links to their Mission News Webpages, please see our previous day’s Image of the Day: CloudSat/CALIPSO Mission Set to Launch.