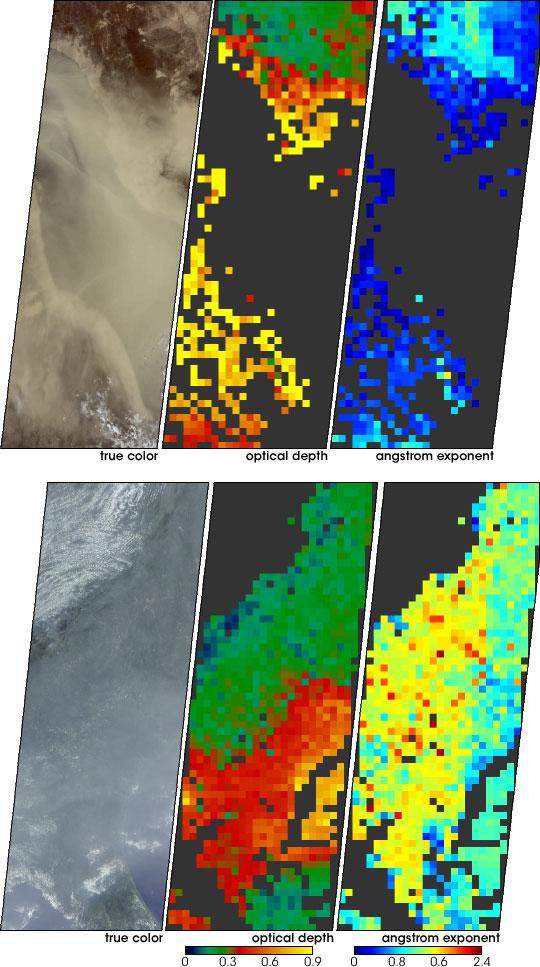 The Size of Dust and Haze

The size of aerosol particles often reveals their source or type. Particles such as sea salt and desert dust tend to be larger than aerosols that come from burning—including forest fires and the burning of fossil fuels for energy. How did the size of the dust particles that obscured the Red Sea on July 26, 2005, contrast with the size of the haze particles that obscured the United States eastern seaboard on the same day? NASA’s Multi-angle Imaging SpectroRadiometer (MISR) on the Terra satellite provides the answer to that question.

In the two strips of images above, three images relating to the Red Sea dust event appear at the top, while three images relating to the U.S. air pollution event appear in the lower row. In each trio, the first image is a photo-like view of the area. The color-coded, second image of the trio is an estimate of the amount of light that was able to penetrate the atmosphere where the aerosols were present (called “optical depth”). The third view is an estimate of the size of the particles (the smaller the “Angstrom exponent,” the larger the particles).

For the optical depth maps, yellow indicates the most optically thick aerosols, whereas red, green and blue show decreasing aerosol amounts. For this dramatic dust storm over the Red Sea, the aerosol is quite thick, and in some places, the dust over water is too optically thick for MISR to estimate the aerosol amount. For the eastern seaboard haze, the thickest aerosols have accumulated over the Atlantic Ocean off the coasts of South Carolina and Georgia. Cases where MISR could not estimate the aerosol amount or particle size because of extremely high aerosol optical thickness or clouds appear as dark gray.

Determining aerosol characteristics is a key to understanding how aerosol particles influence the size, abundance, and rate of production of cloud droplets, and to a better understanding of how aerosols influence clouds and climate. MISR provides a unique look at aerosols because the sensor has nine different cameras, and each of the cameras views the light reflected by the Earth and its atmosphere from a different angle, or point of view. Nearly simultaneous views of the Red Sea dust and East Coast pollution events were provided by Terra’s Moderate Resolution Imaging Spectroradiometer.

The Multi-angle Imaging SpectroRadiometer observes the daylit Earth continuously, viewing the entire globe between 82° North and 82° South latitude every nine days. This image covers an area of about 1,265 kilometers by 400 kilometers. These data products were generated from a portion of the imagery acquired during Terra orbits 29809 and 29814 and utilize data from blocks 60 to 67 and 71 to 78 within World Reference System-2 paths 17 and 170, respectively.