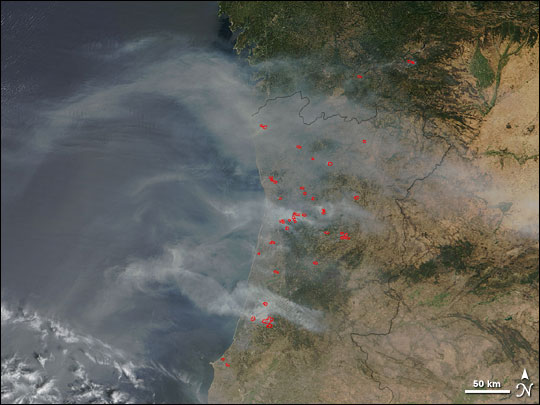 While Portugal faces its worst drought in 60 years, more than 3,000 firefighters struggle to contain almost 20 fires ravaging the countryside. Water shortages and temperatures higher than 100 degrees Fahrenheit (40 degrees Celsius) have hampered fire control efforts. As of August 5, 2005, several firefighters have died and one resident has been badly injured in recent fires, and more than 168,000 acres (68,000 hectares) have burned this year, according to the BBC and Reuters.

The Moderate Resolution Imaging Spectroradiometer (MODIS) on NASA’s Terra satellite captured this image on August 5. In this image, heavy smoke blows westward from the wildfires, shown by red outlines, over the Atlantic ocean. Smoke is also blowing westward across Portugal from its neighbor Spain.

As reported in the BBC, Portugal is one of several Mediterranean countries facing severe heat wave conditions. Spain is suffering the worst drought since recordkeeping began in 1947. Dry, hot weather may have contributed to a locust plague in southern France. High temperatures have led to fatalities in Italy and Algeria. In Algeria, temperatures have soared above 120 degrees Fahrenheit (50 degrees Celsius).

Fires Flare up in Portugal and Spain 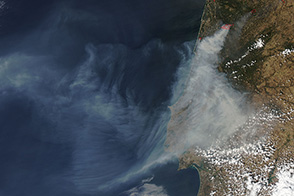 Strong winds fueled a deadly wildfire in central Portugal at the end of August 2013.

Strong winds fueled a deadly wildfire in central Portugal at the end of August 2013.