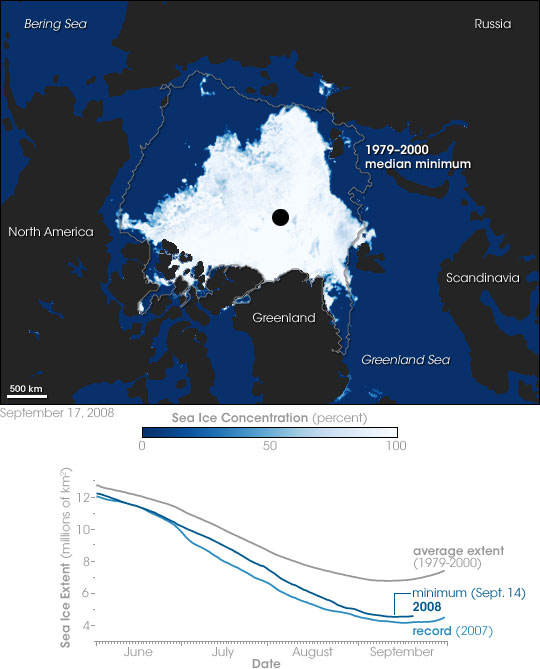 This map (top) shows the extent of sea ice on September 17, 2008, measured by the Advanced Microwave Scanning Radiometer (AMSR-E) on NASA’s Aqua satellite. Percent ice coverage is in shades of light blue to white. The gray line traces the boundary of the area normally covered by ice at the summer minimum based on data from 1979-2000. The line represents the median minimum ice extent; to qualify as "normally ice covered" an area has to meet the center’s criteria of at least 15 percent ice cover in at least half of the years in the record. The extent on September 17 was clearly much smaller than normal. Although this is not the first year the Northwest Passage has been navigable, it is the first year on record that both the Northwest Passage and the Northern Sea Route, on the opposite side of the Arctic, were both open.

The graph (bottom) shows the daily retreat of sea ice during 2008 (dark blue line) compared to both the long-term average (1979-2000, gray line) and the 2007 record low (bright blue line). Not only are the low points in 2007 and 2008 much lower than the 1979-2000 average, they also occur later in the year—shifted toward the middle of September. Long-term climate change isn’t the only factor that can influence the precise date of the minimum. Short-term weather patterns, including cold or warm spells and wind strength play a role in determining when Arctic waters begin to re-freeze.

An animation of sea ice data from January 1 through September 9 shows the changes in ice extent from winter through summer in the Northern Hemisphere. The animation starts with a view of the planet centered on North and South America in January 2008, and shifts toward a polar view, with Alaska at bottom center and Russia and Scandinavia near top center. The Arctic Ocean basin is nearly 100 percent ice covered (almost solid white) through mid-spring, but by late April and early May, the color shifts to pale blue in places, indicating more open water mixed with ice. By early June, the Bering Strait, between Alaska and Siberia, is ice-free. Between mid-July and mid-August the retreat becomes more rapid. By early September, open waters ring a greatly reduced polar ice pack.

NASA map by Robert Simmon and Jesse Allen, and graph by Michon Scott, based on data from the National Snow and Ice Data Center. Animation by the Scientific Visualization Studio at NASA Goddard Space Flight Center. Caption by Rebecca Lindsey.

The arrival of Northern Hemisphere autumn signals the end of the seasonal retreat of Arctic sea ice. Polar scientists from the National Snow and Ice Data Center report that sea ice appeared to hit its lowest extent on September 14, 2008, when the area at least 15 percent covered by ice dropped to 4.52 million square kilometers (1.74 million square miles).