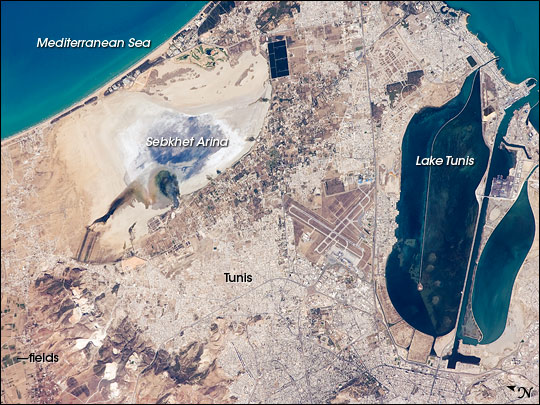 The city of Tunis, capital of Tunisia, is located along the Mediterranean coast of northern Africa. Sharing much of its history with famous Carthage to the north, Tunis was also destroyed by the Roman Empire in approximately 146 BC. Tunis, however, was rebuilt by the Romans and became an important agricultural center. Modern Tunis serves as the administrative center for the whole of Tunisia, and as a commercial hub in the northern part of the country.

The urban area of Tunis is located on a flat coastal plain, and is distinguished in this astronaut photograph from the surrounding desert by the pattern of grey and tan buildings and the dark street grid. The city is bordered by an evaporating saline lake to the northeast known as Sebkhet Arina (upper left). Evaporite minerals such as halite (sodium chloride, or table salt) and gypsum produce the white deposits. They surround the darker lake center, where there is more moisture. The western urban-rural fringe is defined by a range of low hills (lower left). On the western side of these hills, dark green agricultural fields are visible.

To the southeast of the city is Lake Tunis, a lagoon that people have significantly altered from its natural state. For example, it is completely closed off from the Mediterranean Sea except for two channels, and has been since Roman times. The general lack of water circulation and input of nutrients from wastewater have altered the ecosystem, allowing reef-forming marine worms to become established; the reefs further stifle water circulation. The wastewater also causes eutrophication (overly fertile waters that trigger algae overgrowth) and occasional fish kills.

Astronaut photograph ISS017-E-13769 was acquired on August 19, 2008, with a Nikon D2Xs digital camera fitted with a 400 mm lens, and is provided by the ISS Crew Earth Observations experiment and the Image Science & Analysis Laboratory, Johnson Space Center. The image was taken by the Expedition 17 crew. The image in this article has been cropped and enhanced to improve contrast. Lens artifacts have been removed. The International Space Station Program supports the laboratory to help astronauts take pictures of Earth that will be of the greatest value to scientists and the public, and to make those images freely available on the Internet. Additional images taken by astronauts and cosmonauts can be viewed at the NASA/JSC Gateway to Astronaut Photography of Earth. Caption by William L. Stefanov, NASA-JSC.

The urban area of Tunis is located on a flat coastal plain, and is distinguished in this astronaut photograph from the surrounding desert by the pattern of grey and tan buildings and the dark street grid. The city is bordered by an evaporating saline lake to the northeast known as Sebkhet Arina (upper left).

The city-state of Carthage in North Africa was founded by Phoenician settlers in 814 BC, and it subsequently became the seat of a trade empire that controlled much of the western Mediterranean region (including most of the former Phoenician lands). Carthage was completely destroyed by the Roman Republic during the Third (and final) Punic War (149-146 BC). The end of Carthage has been made notorious by the story that the Romans allegedly sowed the city with salt to ensure that no further rivals to their power would arise there. However, given the great value of salt at the time and the strategic importance of the city’s location, scholars dispute whether the event actually occurred. Following the destruction of Carthage, Roman dominance of the Mediterranean continued until the fall of the Western Empire in 476 AD.