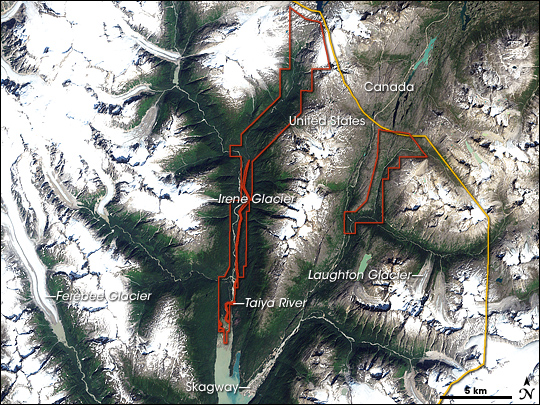 In July 2002, campers in Alaska’s Klondike Gold Rush National Historical Park awoke to a flooded campground. Rain had fallen the day before, but not enough to explain the water now sloshing around their ankles. The high waters resulted from the collapse of a moraine—a ridge of rock and debris deposited by a glacier. The collapse dumped some 570 million cubic meters (750 million cubic yards) of ice and dirt into a lake at the glacier’s base, causing it to overflow.

NASA’s Landsat 7 satellite captured this image of part of Klondike Gold Rush National Historical Park on August 1, 1999. This natural-color image shows the park’s summertime mix of ice, water, and vegetation. The city of Skagway appears at the bottom, near the inlet of the Taiya River. West of the river are the Ferebee and Irene Glaciers. The Laughton Glacier lies to the east of the river. The Taiya River courses along the border between Alaska and Canada.

Klondike Gold Rush National Historical Park has historically enjoyed a maritime climate, with cool summers and mild winters. Park rangers cited the moraine collapse as evidence that the park’s ecosystem was responding to a changing climate, reported The New York Times. Other events suggesting climate change impacts on parks include drought-exacerbated fires, pine beetle infestations, and the shifting of cool habitats up mountain slopes, according to a joint report from the National Park Service and NASA.