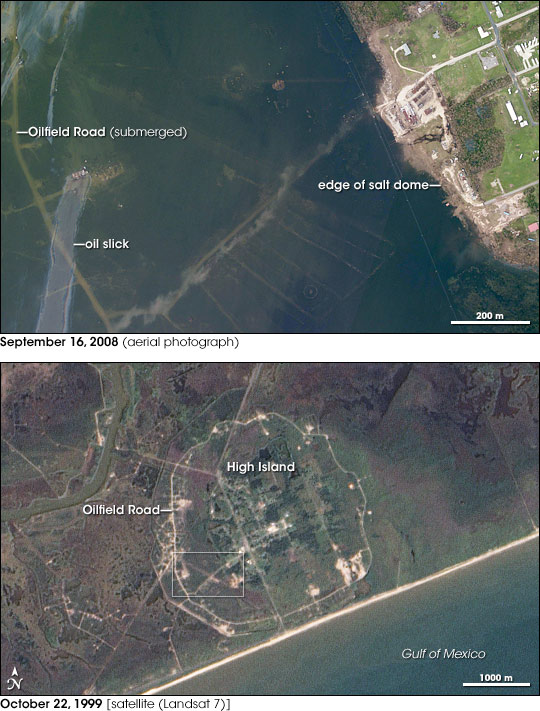 East of Galveston, Texas, a thin barrier beach—Bolivar Peninsula—stretches along the coastline. Like Galveston, this barrier beach lay directly in the path of Hurricane Ike in September 2008. On the far eastern end of Bolivar Peninsula is High Island, so named for the salt dome that boosts the area some 11.6 meters (38 feet) above the rest of the Gulf Coast between Mobile, Alabama, to the Yucatán Peninsula.

These images show High Island before and after the destruction caused by Hurricane Ike. NASA’s Landsat 7 satellite captured the bottom image on October 22, 1999. In this image, the encircling Oilfield Road delineates High Island, which otherwise looks similar to the surrounding landscape, with its mixture of urbanized and vegetated areas. The white rectangle in this image outlines the area shown in the top image. A photographer with the U.S. National Oceanic and Atmospheric Administration (NOAA) took the top photo from an airplane on September 16, 2008. In the top image, High Island really has become an island. Off the edge of the salt dome, water has submerged the landscape, and an oil slick floats over Oilfield Road.

After Hurricane Ike passed, rescuers combed the destroyed communities along Bolivar Peninsula, looking for survivors among the rubble. Thanks to its elevation, High Island fared better than other parts of Bolivar Peninsula. On September 15, 2008, bridge inspectors pronounced the overpass linking High Island with the mainland stable. Another bridge, at the peninsula’s narrowest point, was too twisted to be safely used.

High waters devastated communities along Bolivar Peninsula. One survivor, whose house had rested atop pilings that lifted it some 5 meters (16 feet) off the ground, recounted having to take cover in the attic to await rescue, while ocean waves swept away the porch, the bathroom, and finally the walls of the house.

East of Galveston, Texas, a thin barrier beach—Bolivar Peninsula—stretches along the coastline. On the far eastern end of Bolivar Peninsula is High Island, so named for the salt dome that boosts the area some 11.6 meters (38 feet) above the rest of the Gulf Coast. After Hurricane Ike passed, rescuers combed through the destroyed communities along Bolivar Peninsula. Thanks to its elevation, High Island fared better than other parts of the Peninsula. 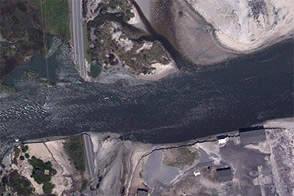