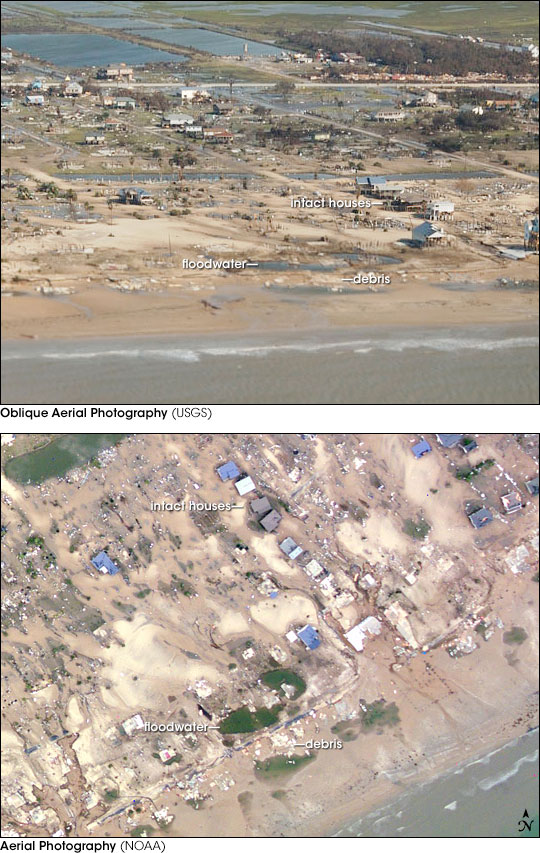 When Hurricane Ike came ashore over Texas and Louisiana on September 13, 2008, it was not the knock-you-down winds or drenching rain that caused the most extreme damage, it was the storm surge. Ike pushed a bulge of water ashore as it moved inland, inundating miles of coastline. The most destructive force associated with the storm was northeast of the eye, where the storm’s forward motion combined with the powerful winds circling the eye to propel a large wall of water into southeastern Texas. Southeast of Houston and across a narrow span of water from Galveston, the Bolivar Peninsula bore the brunt of Ike’s destructive power. These photos of Crystal Beach, Texas, a community on the Bolivar Peninsula, illustrate just how much damage a storm surge can cause.

Both photos were taken with a camera onboard an airplane. The top photo, taken during a survey made by the U.S. Geological Survey (USGS) on September 15, provides an oblique view of Crystal Beach. This side-on view emphasizes the profile of the town, giving a feel for how it would look from the ground. Clearly, few houses were left standing after Ike came through.

The lower photo, taken by the National Oceanic and Atmospheric Administration (NOAA) on September 14, shows the same region from directly overhead, a view that more fully illustrates the extent of the damage. Water swept ashore in the storm remains here and there, pooled in depressions. The rest of the scene is washed with sand, which was raked over debris as the powerful surge drained back into the Gulf.

The photos were taken to help communities respond to the disaster. Aerial photography is valuable because it provides a highly detailed view of damage in a small area. Satellites, on the other hand, can provide a wide-scale view, useful in mapping out the extent of a disaster. For example, the Moderate Resolution Imaging Spectroradiometer (MODIS) on NASA’s Terra satellite observed flooding over hundreds of kilometers of the Gulf Coast on September 17, but could not image damage down to the street level as these photographs do. Also, unlike a satellite, an airplane is capable of flying beneath clouds.

Flooding along the Gulf Coast