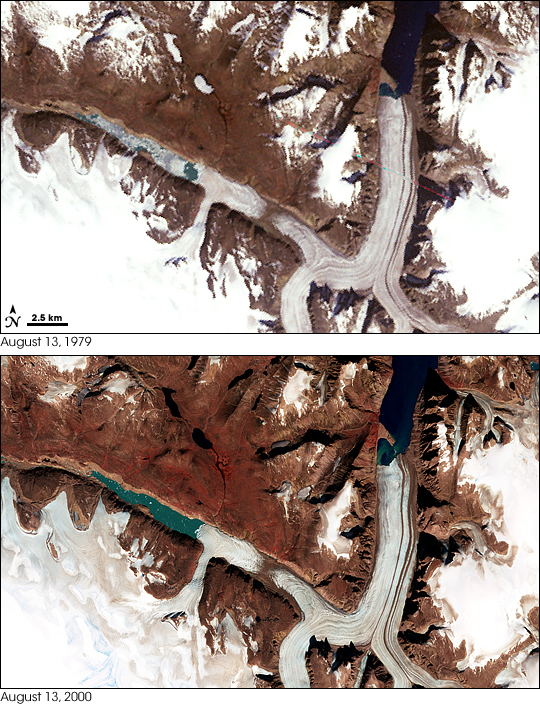 Penny Ice Cap is the southernmost of Canada’s big ice caps. Located on Baffin Island, the ice cap has a maximum elevation of about 1,900 meters. Like other glaciers and ice caps in the Northern Hemisphere, the Penny has been thinning and its valley glaciers have been retreating in recent decades. A 2004 study of the Penny Ice Cap using NASA airborne lasers flown on missions in 1995 and 2000 showed that the lower elevations of the Penny Ice Cap had thinned by as much as 1 meter per year. However, scientists are uncertain how much of the retreat is because of recent climate change (global warming) and how much of it is due to declines that have been going on since the end of a climate period called the Little Ice Age.

This pair of images from NASA’s Landsat satellites shows part of the northern margin of the Penny Ice Cap in 1979 (top) and in 2000 (bottom). Several signs of change are apparent in these two summer-time scenes. Lakes that were frozen in August of 1979 are ice-free in 2000. The large valley glacier in the right-hand side of the image has receded from the spit of land jutting out into the valley. The large lake at the terminus of the glacier along the bottom of the scene is filled with floes of ice in 1979, but almost completely ice-free in 2000.

Although some of the changes on the Penny Ice Cap are occurring slowly, over decades or even centuries, other changes can be extremely rapid. In mid-summer 2008, two weeks of record warmth in the area, combined with rain falling on snow and thawing permafrost, caused a pulse of melt water to race through the southern part of Auyuittuq National Park, where the Penny Ice Cap is located. The flash flooding washed out a bridge, and erosion and ground slumping (as a result of melting permafrost) destroyed some sections of trail.