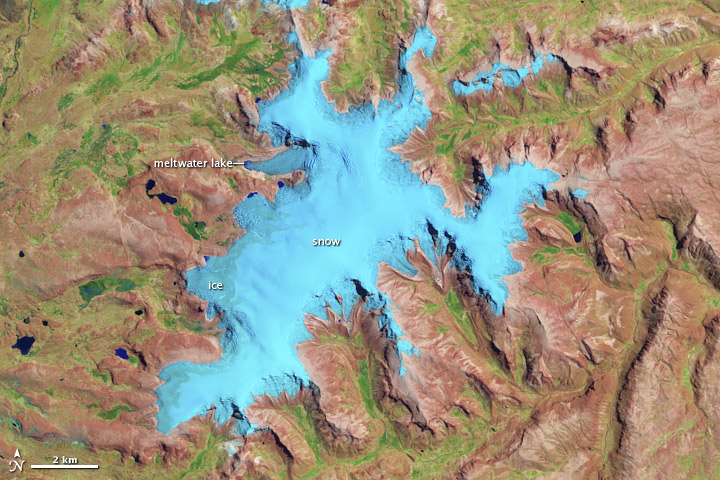 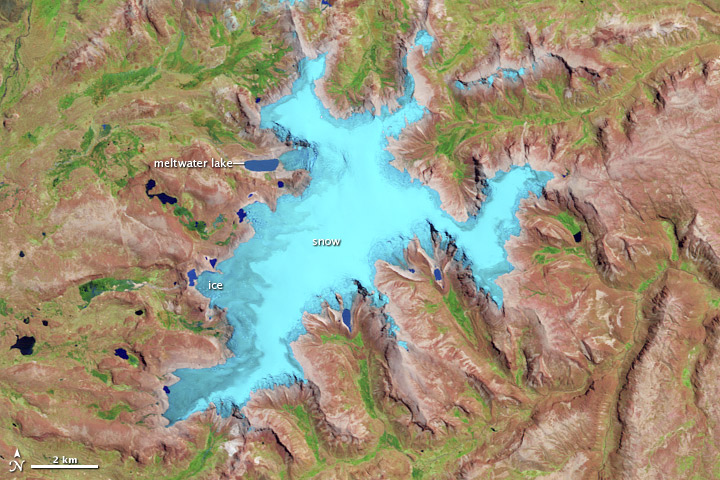 Glaciers and ice caps grow through the long-term accumulation and compression of snow, and these monstrous blocks of ice usually respond slowly to changes in Earth’s climate. This can make them excellent recorders of climate changes. But when they recede quickly, they can also become potent symbols of warming trends in the wider world.

The Quelccaya Ice Cap in Peru is rare for several reasons. Situated at 13.5 degrees South latitude, it lies between the Tropic of Capricorn and the Equator, and it is the world’s largest tropical ice cap. This collection of glaciers grows on a high-altitude plateau in the Andes Mountains, between the Amazon jungle to the east and tropical, eastern Pacific waters to the west. Because of its location, the ice cap captures chemical signatures of the cycles of El Niño and La Niña. Those signatures from the atmosphere are locked in ice cores that Lonnie Thompson and colleagues from Ohio State University have drilled from Quelccaya, and they provide nearly year-by-year records of temperatures and atmospheric composition dating back 1,800 years.

Based on field and laboratory work by Thompson’s team—as well as three decades of satellite imagery—scientists also know that Quelccaya has been shrinking rapidly. The Thematic Mapper on the Landsat 5 satellite captured these images of Quelccaya on September 3, 1988 (top) and September 16, 2010 (bottom). Both images use a combination of visible, near-infrared, and shortwave infrared light. Brick-colored land around the glacier is largely barren. Green patches indicate vegetation, mostly wetlands known as bofedales.

Snow and ice appear in shades of light blue or cyan. The difference between snow and ice is subtle, but snow is slightly lighter. Liquid water appears blue, but not all ponds and lakes are the same shade of blue. Meltwater lakes along the margins of the ice are typically lighter due to glacial flour—fine particles produced by the grinding movement of the ice over bedrock.

The biggest meltwater lake in the image lies at the end of the Qori Kalis glacier in the northwestern half of the ice cap. Between 1988 and 2010, the lake grew as Qori Kalis shrank. Over the same period, other meltwater lakes grew around the margins of the ice cap. “There appear to be eight lakes that have formed since the 1988 image was acquired,” noted Thompson.

The retreat of this Andean ice cap has done more than fill meltwater lakes; it has exposed ancient plants that were effectively frozen in time and place as the glacier advanced. As the glaciers have retreated in recent decades, the plants have provided clues as to how long the ice had been there. Radiocarbon dating has enabled Thompson and colleagues to estimate that plants collected on the edges of meltwater lakes over the past decade were between 4,700 and 6,300 years old.

In recently published research, Thompson and colleagues note: “Quelccaya is now smaller than it was 6,000 years ago. Moreover, the plant ages confirm that the advance of the Quelccaya Ice Cap about 6,000 years ago was much slower—about 300 meters over 1,600 years—than its current rate of retreat of about 300 meters in 25 years.”