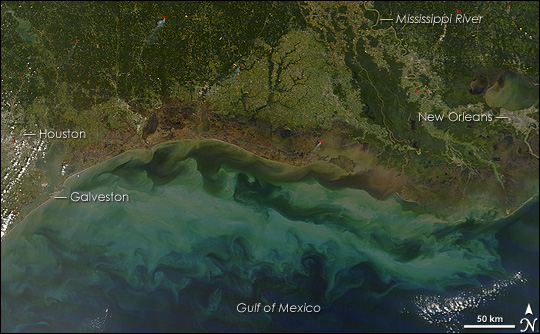 This photo-like image of the Texas and Louisiana coasts shows the impact of Hurricane Ike’s powerful storm surge on coastal wetlands. Hurricane Ike came ashore over southeast Texas on September 13, 2008, bringing with it a wall of water that stretched from Galveston, Texas, across all of coastal Louisiana. The storm’s surge covered hundreds of kilometers of the Gulf Coast because Ike was a large storm, with tropical-storm-strength winds stretching more than four hundred kilometers from the center of the storm. The strongest storm surge devastated Galveston and the Bolivar Peninsula. Though it was not as hard hit, coastal Louisiana—still trying to dry out from Hurricane Gustav—suffered as well.

Most of the shoreline in this region is coastal wetland. The surge of ocean water from the Gulf pushed far inland, inundating the wetlands. The salty water burned the plants, leaving them wilted and brown. A strip of brown lines the coast for hundreds of kilometers. This line of brown corresponds with the location and extent of the wetlands. In places where the water lingers, the impact on the plants will be much greater than those areas simply washed by the surging salt water.

In other cases, the damage is physical, with plants washed away or marshland removed or shifted, says John Barras, a geographer with the USGS National Wetlands Research Center stationed at Louisiana State University. Apart from damaging wetland vegetation, the powerful tug of water returning to the Gulf of Mexico also stripped marsh vegetation and soil off the land. Some of the brown seen in the wetlands may be deposited sediment. Scientists don’t yet know how long it will take the wetlands to recover from the storm damage. The Louisiana wetlands have yet to recover from damage caused by Hurricanes Rita and Katrina in 2005, says Barras.

North of the brown line, the vegetation gradually transitions to pale green farmland and darker green natural vegetation untouched by the storm’s surge. A few fires, most of which are probably agricultural fires, are outlined in red.

The Gulf is also thick with sediment in this image. Plumes of brown pour from land as sediment-choked water continues to drain into the Gulf both from rivers and from the coast in general. The muddy water slowly diffuses, turning pale green, green, and finally blue as it blends with clearer water. The diagonal stripes in the water are an artifact of the satellite sensor.