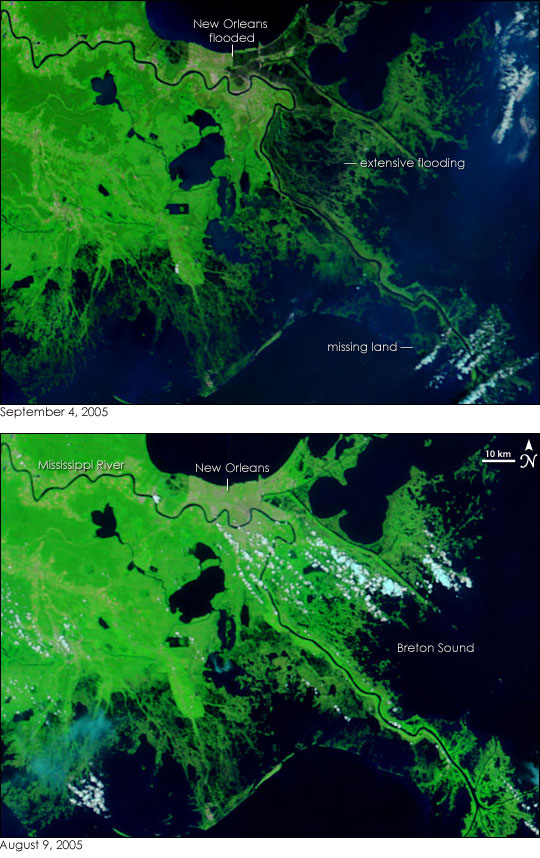 Nearly a full week after Hurricane Katrina blasted ashore over southeastern Louisiana and southern Mississippi, the clouds cleared to give the Moderate Resolution Imaging Spectroradiometer (MODIS) a clear view of extensive flooding in the wetlands southeast of New Orleans. The floods are black against bright green vegetation in these false-color MODIS images taken on September 4, top, and August 9, bottom.

The floods demonstrate how coastal wetlands function to protect inland regions from the destructive storm surge unleashed during powerful hurricanes such as Katrina. The wetlands act as a sponge, soaking up water that pounds the coast during the storm. After the storm, the wetlands retain water, which is why widespread flooding is still evident six days after the storm had passed. If the wetlands had not been there, the storm surge could have penetrated much farther inland. By contrast, there were no wetlands to buffer New Orleans from Lake Pontchartrain, so the storm-churned lake was able to burst through the levees that separated it from the city.

Wetlands also act as nature’s “kidneys,” filtering pollutants from the water. However, like kidneys, too much pollution will destroy the wetlands. If the contaminated flood water currently covering New Orleans were to be drained through the wetlands seen here, the wetlands could be damaged.

Wetland loss in coastal Louisiana is a rising concern among scientists. The United States Geological Survey reports that Louisiana lost 1,900 square miles of land between 1932 and 2000, with an average 34 square miles of land disappearing every year. Though many things contribute to wetland loss, one of the primary reasons wetlands are disappearing is water use. Canals and levees prevent the regular floods along the Mississippi River that would otherwise carry sediment to the wetlands. Meanwhile, the daily ebb and flow of the ocean washes away bits of land. Since the sediment is not replaced by regular floods, the ocean gradually eats away at the wetlands until they disappear. As the top image demonstrates, without wetlands, inland cities would be more prone to storms. Though extensive flooding is evident in the wetlands, is not yet known what long-term impact Katrina had on Louisiana’s wetlands.

The large images provided above are at MODIS’ maximum resolution of 250 meters per pixel. Daily images of the region are available in a variety of resolutions.