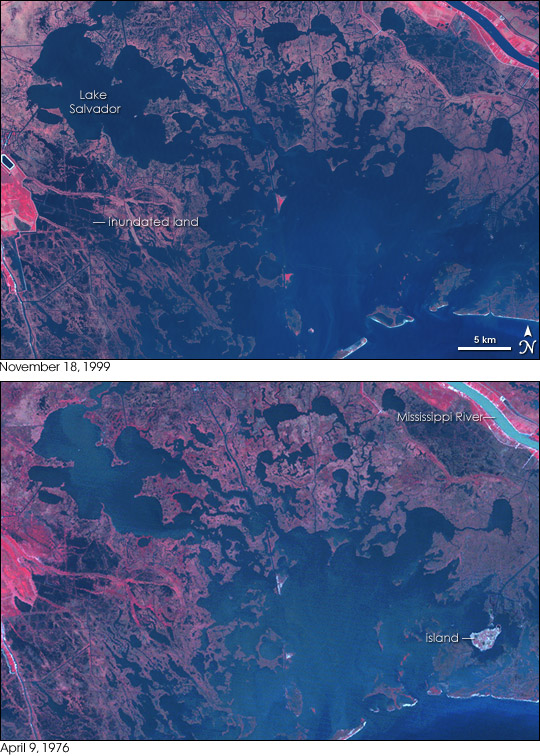 Wetlands are one of the most productive ecosystems on Earth. In addition to providing a habitat for a wide variety of plants and animals, wetlands protect inland ecosystems and resources. Wetlands act as a natural filter as plants soak up pollutants from the water. Along a river or ocean shore, wetlands absorb the impact of a storm surge or a river flood by providing a break over which the water loses its destructive energy. But the world’s wetlands are under pressure. In a recent survey of 17 wetlands using Landsat satellite imagery, Jim Coleman, a coastal geologist at Louisiana State University, found that all had declined very quickly in recent years. Louisiana’s coastal wetlands, shown in this pair of Landsat images, are among those that are steadily disappearing.

Since the 1970s, when the lower image was taken, Lafourche Parish has lost 40 to 50 percent of its land. The loss is apparent in the top image, taken on November 18, 1999, where the parish is shown on the left side of the image. Much of the land to the south of Lake Salvador has been inundated with water. Lake Salvador has also expanded, and the land that once jutted into the lake in many places had disappeared by 1999. Wetland loss is apparent in many other regions as well. Bodies of water in Jefferson Parish, top center, are larger in 1999, and an island in the lower right corner of the image has vanished entirely.

There are many reasons for wetland loss, some natural and some related to human activity. In many places, wetlands are drained or filled in for agriculture or industry. In Louisiana, the wetlands are being lost to the ocean. The soil in wetlands naturally compresses and sinks over time, a process called subsidence. Normally, the growth of plants and the infusion of fresh sediment from river floodwater offset subsidence. Over the past 50 years, says Coleman, plants have not been able to keep up with sinking soils, and scientists don't know why. As a result, the world’s wetlands are sinking into the ocean faster than they are building up.

In southern Louisiana, like many other places, the problem is compounded by the lack of fresh sediment from regular river floods. Since floods along the Mississippi River are extremely destructive, cement-lined levees regulate the flow of water in the river and prevent floods. The levees send sediment into the Gulf of Mexico instead of allowing it to be distributed over the wetlands. Further, canals cut into the wetlands for shipping channels provide a way for salt water to seep into freshwater wetlands, creating an environment where wetland plants cannot survive. All of these things have contributed to the steady disappearance of wetlands in Louisiana at such a rate that the Environmental Protection Agency estimates that one-third of coastal Louisiana will have vanished into the Gulf of Mexico by 2050.