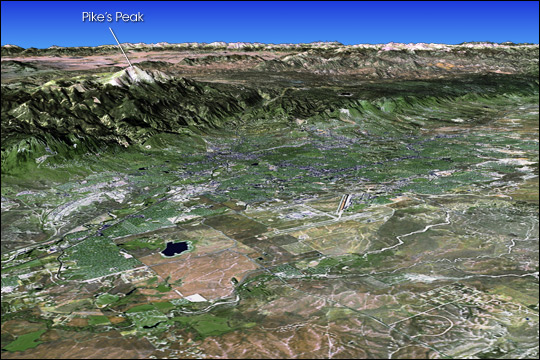 Snow-capped Pike’s Peak towers over Colorado Springs in this Landsat scene. At 14,110 feet above sea level, Pike’s Peak is the 31st highest peak in Colorado. Nestled in Colorado’s Front Range, it is the farthest east of the large Rocky Mountain peaks. Today the mountain bears the name of military explorer Zebulon Montgomery Pike, who viewed the mountain from a hundred miles away while exploring the far-flung, southwestern corners of the land that the United States obtained in the Louisiana Purchase in 1803.

For many years after the mountain acquired its English name, the region remained unsettled, but the discovery of gold in the late 1850s brought a rush of fortune seekers, and gave rise to the famous phrase “Pike’s Peak, or Bust!” In the 1870s, General William Palmer began building up the city of Colorado Springs in the valley below Pike’s Peak, and today, the city is Colorado’s second largest, with a population of nearly 900,000 in the city and surrounding metro area.

The image above is a visualization created by merging natural-color imagery (Bands 3, 2, and 1) from the Landsat 7 satellite’s Enhanced Thematic Mapper Plus (ETM+) instrument collected on September 20, 2002, with elevation data from the Shuttle Radar Topography Mission (SRTM) that flew on the Space Shuttle Endeavor, which launched in February 2000.

Landsat 8 acquired this false-color image of the the East Peak fire in southern Colorado on June 22, 2013.

Landsat 8 acquired this false-color image of the the East Peak fire in southern Colorado on June 22, 2013.