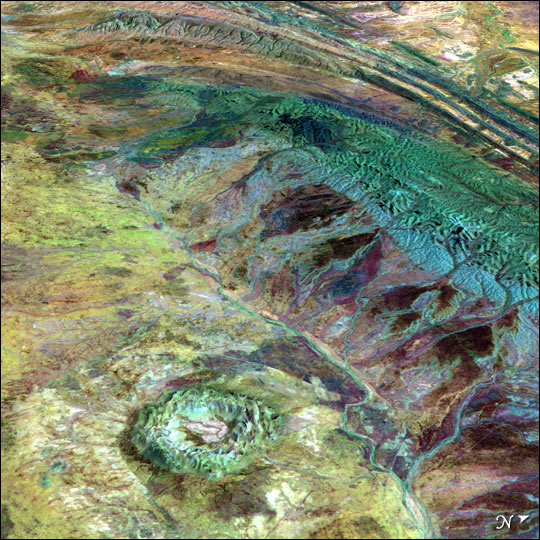 Gosses Bluff is one of the most significant impact structures in the world. Located about 205 kilometers west of Alice Springs, in Northern Territory, Australia, the crater has been largely preserved in the dry, lightly vegetated region. Gosses Bluff was probably formed by the impact of a large comet or meteorite about 142 million years ago. Traveling at a rate of about 40 kilometers per second, the object slammed into the surface of the Earth, leaving a crater that was about 22 kilometers in diameter. The structure we now see is the result of erosion—the crater would originally have had an outer raised rim and a prominent central peak. The core of the original crater is now represented by a ring of low hills, seen in the lower left side of the image. The ghostly remnants of the outer rim are visible from space in astronaut photos as a faint circle around the crater that is seen here.

This perspective view was created by draping a false-color composite image over a digital elevation model. These data were acquired by the Advanced Spaceborne Thermal Emission and Reflection radiometer (ASTER) instrument aboard the Terra satellite on October 11, 2003. The composite image uses shortwave infrared, near infrared, and green wavelengths (ASTER bands 7, 3, & 1), while the digital elevation was computed from the stereo pair data channels. Surface elevations are shown true to scale without vertical exaggeration.